AdwCleaner 8.0.0 is out: drops Windows XP and Vista support

The company acquired AdwCleaner back in 2016 and has produced new versions of the application for free since.

AdwCleaner 8 supports Windows 7, Windows 8.1 and Windows 10 officially. The new version can be downloaded from the developer website and run without installation after the download.

The program's main interface has not changed in the new release. It displays the "scan now" button in prominent position to scan the system for adware, potentially unwanted software and preinstalled software (that may be unwanted as well). 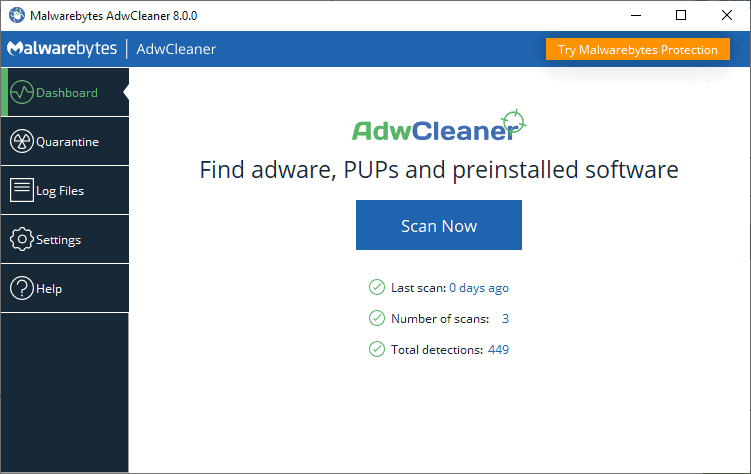 The program's core was updated in the new release. The new version features an upgrade to Qt 5.13 and new OpenSSL version, and the build toolchain was upgraded to use Visual Studio 2017.

Chrome users will notice that AdwCleaner 8.0.0 supports the latest version of the Chrome browser again so that remediation is supported. The new version drops support for Firefox scanning and remediation but it will be back in early December according to Malwarebytes when AdwCleaner 8.0.1 is released.

Chrome users benefit from a new scan and remediation module and Firefox users will benefit from the same once the implementation lands in the next version.

Another change in AdwCleaner 8 is that debug logs are not generated anymore by default. It is still possible to enable the option in the settings, but it is turned off by default. The new version features updated translations and definitions next to all that.

The program should be more stable thanks to the improvements made in the version.

Tip: you may want to check the settings on first run before you run a scan. You find options to turn off the cloud database (which may impact scan results), enable or disable basic repair options, e.g. reset firewall or IE policies, and maintain a list of exclusions that you don't want scanned by the application.

AdwCleaner is a handy portable program for Windows that you may run every now and then to verify that the system is adware free.

Now you: do you use programs like AdwCleaner as additional security scanners on Windows?

Previous Post: « How to access Advanced Options quickly on Windows 10 devices
Next Post: Split or Merge PDFs with PDFsam Basic, an open source program for Windows, Linux and macOS »