Firefox uses a multi-process system currently that divides website content and browser specific content using multiple processes. Multiple sites may share a process and one of the main goals of Project Fission is to isolate these, including cross-site iframes, entirely.

Google implemented site isolation in its Chrome browser in 2018 stating that the feature improved security and stability of the browser. Google noted however that the feature would increase memory usage by about 20% on average.

Firefox users could enable Fission when the Nightly version hit version 69 already but this was mostly useful for internal testing of functionality. Now, with the release of Firefox 70 Nightly comes an official "go" from the organization to test the new site isolation feature. 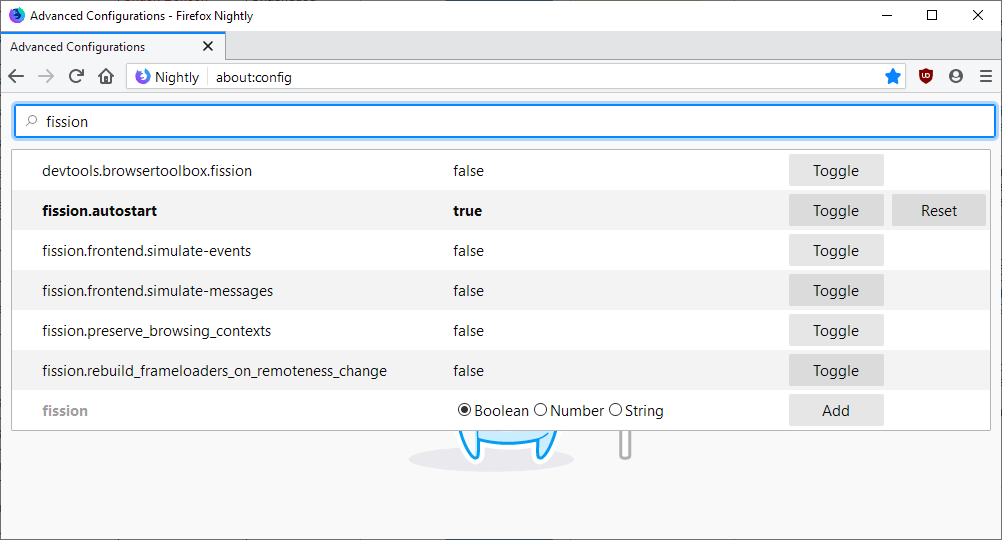 Site isolation is not enabled by default in the Firefox web browser at the time of writing. Users need to enable Fission to make use of it. When it is enabled, Firefox will load any cross-site iframe in its own content process.

When Fission is enabled, each cross-site iframe is loaded in a different content process, meaning lots of different processes participate in drawing  a single tab. The hover tooltip for a Fission-enabled tab is annotated with a "[F …]" containing a series of process IDs, as shown in the image below, serving as a visual verification of an active Fission-enabled session.

You may hover over any tab in the Firefox web browser after enabling Fission to display the process IDs used by Firefox to display that website.

Site Isolation is still a work in progress. Mozilla notes that it should be used for testing and not day-to-day browsing as users may experience stability and functionality issues because of open bugs.

Firefox users may also check the remote processes listed on the about:support page of the web browser to list web isolated processes.

Site Isolation improves the stability and security of the Firefox browser when enabled at the expense of increased memory usage. Memory usage will likely increase by about the same percentage that Chrome's memory usage increased after the implementation; this would mean an increase of about 20%.

Mozilla has yet to pick a release target for the new feature.

Now You: What is your take on Fission in Firefox? (via Techdows)

Martin Brinkmann is a journalist from Germany who founded Ghacks Technology News Back in 2005. He is passionate about all things tech and knows the Internet and computers like the back of his hand. You can follow Martin on Facebook or Twitter
View all posts by Martin Brinkmann →
Previous Post: « Firefox 70 shows an indicator when geolocation has been used
Next Post: Goodbye Firefox Quantum, Hello Firefox Browser »