KeePass 2.40 is out: here is what is new - gHacks Tech News
ghacks.net

KeePass 2.40 was released on September 10, 2018. The new version of the password manager comes with new auto-complete functionality when editing certain data fields, enhanced compatibility checks for plugin dlls and more.

Existing users of KeePass who have update checking turned on in the password manager should receive update notifications; KeePass does not include an automatic update function which means that all users need to download the latest version from the official website.

Setup is straightforward and the software will either be installed or existing copies upgraded to the latest version depending on the local setup. 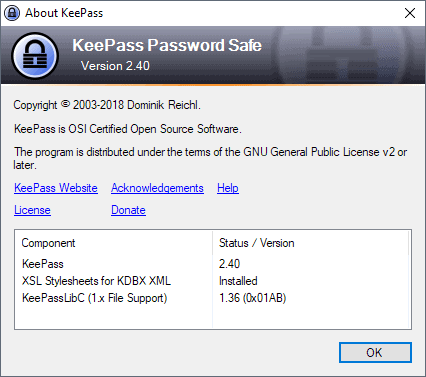 KeePass 2.40 introduces auto-complete functionality for usernames in the add and edit dialog and auto-type dialog, and for usernames and URLs in the "Open From URL" dialog.

All auto-complete options are active automatically. When you edit saved accounts and click in the username filed you will notice that KeePass makes suggestions based on what you type and the "other" usernames stored in the database that you opened. 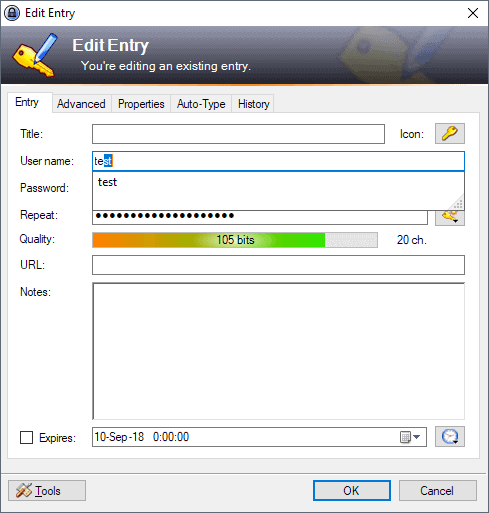 The same is true for the other dialogs that support auto-completion. I could not find an option to turn the functionality off in KeePass 2.40. It has its uses, especially if you consider that username is often the email address so that you may be able to fill out the username quicker when adding new accounts or editing them.

You can add attachments to entries in KeePass. The password manager includes options to view certain data types saved as attachments directly in the application.

All you have to do is click on the attachment to display it in the data viewer if it is supported (images for instance).

The updated viewer supports zooming. You can use buttons to zoom, Ctrl-mousewheel, or CTrl+ or Ctrl-. 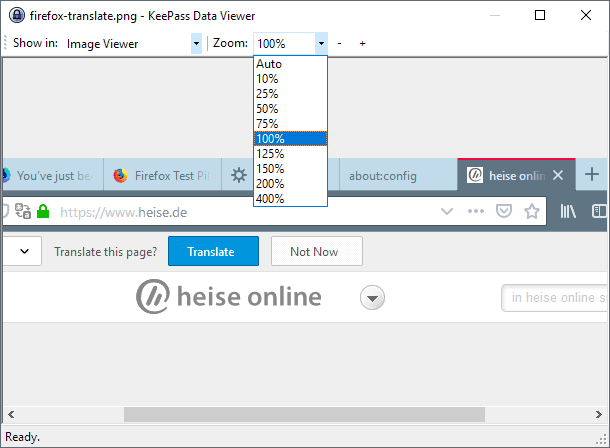 KeePass 2.40 includes several other new features. The developer improved compatibility checks for DLL plugins and added an option to disable that KeePass remembers the master password (encrypted) while a database is open.

Also new: Find has a new Group Path option that you may check when running searches and plugins can make use of the new URL opening event.

The new version of the password manager comes with improvements as well. The responsiveness of the user interface is improved during "long operations" according to the changelog, and KeePass won't create a KeePass folder in the user's application directory anymore if the configuration file is located outside of the folder structure.

You can check the full changelog for all of the changes here. Check out these helpful resources if you want to get the most out of the password manager:

KeePass 2.40 improves the password manager in several ways. Most changes and new features fly under the radar; in fact, the only change that most users will likely notice is the new auto-complete functionality in certain dialogs.

That does not mean that the changes or new features are not welcome. Plugin developers get new options and users who use certain features will benefit from changes as well.

Martin Brinkmann is a journalist from Germany who founded Ghacks Technology News Back in 2005. He is passionate about all things tech and knows the Internet and computers like the back of his hand. You can follow Martin on Facebook or Twitter
View all posts by Martin Brinkmann →
Previous Post: « KFK File Splitter review
Next Post: How to prevent laptop CPU Throttling »