Firefox add-on Adblock Plus released as a WebExtension

Adblock Plus, the -- by far -- most popular browser extension for the Mozilla Firefox web browser, has been released as a WebExtension.

Firefox 57 will be released in eight days to the stable channel. The new version of the Firefox web browser breaks the traditional add-on system by supporting WebExtensions exclusively.

Any add-on that is not a WebExtension by then won't install in the browser anymore by then, or deactivated if a legacy add-on is installed already.

Mozilla will move legacy add-ons to a new section on about:addons. You find all disabled legacy add-ons listed there, and an option to find a replacement for each add-on. The search redirects to Mozilla's main AMO website and is a hit and miss kind of experience. One reason for that is that there are legacy add-ons for which no comparable WebExtension extension exists. 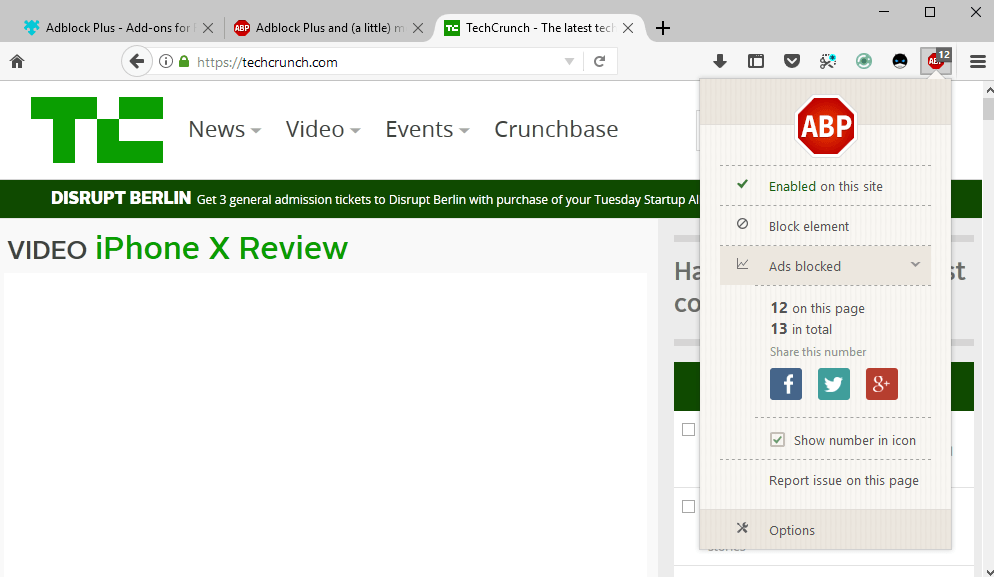 Adblock Plus is the most popular Firefox add-on. It has more than 14 million users according to Mozilla; the second placed add-on, uBlock Origin, has 4.1 million users.

It would be disastrous for Mozilla but also for the company behind Adblock Plus if a WebExtension version would not be available before the release of Firefox 57.

Mozilla would be painted in a bad light if the most popular extension for Firefox would not function anymore in Firefox 57; and the developer of Adblock Plus would likely lose a huge part of the user base, as users would migrate to other content blocking solutions for the Firefox web browser.

The release of Adblock Plus 3.0 for the Firefox web browser ensures that none of this will happen. The browser extension is based on WebExtensions which means that it is fully compatible with Firefox 57 and newer versions of the web browser.

Adblock Plus 3.0 introduces new functionality, and some regressions and issues as well. As far as positive things are concerned:

The following issues and changes are introduced:

The release of the WebExtensions version of Adblock Plus adds another popular -- the most popular in this case -- add-on to the list of compatible browser extensions. That's good news for the 14 million users of the browser extensions, and also for Mozilla and the company.

Now You: What's your take on Adblock Plus?

Previous Post: « Tor on Linux/Mac may leak IP (update available)
Next Post: What's going on with Xmarks for Firefox? »