The new version of the popular file transfer client WinSCP for Windows, WinSCP 5.11, is a major update that brings faster transfers, better multi-monitor support and OneDrive support among other things.

WinSCP is a file transfer software program that supports SFTP, SCP, FTP and WebDav connections. It is mainly being used to connect a local computer with a remote computer; the client supports file transfers, direct edits, integration with Putty, directory synchronziation and a lot of other features that make it a popular choice for webmasters, server administrators and others who work with remote devices.

We reviewed the program back in 2007 for the first time. It has been updated regularly since then and improved significantly. 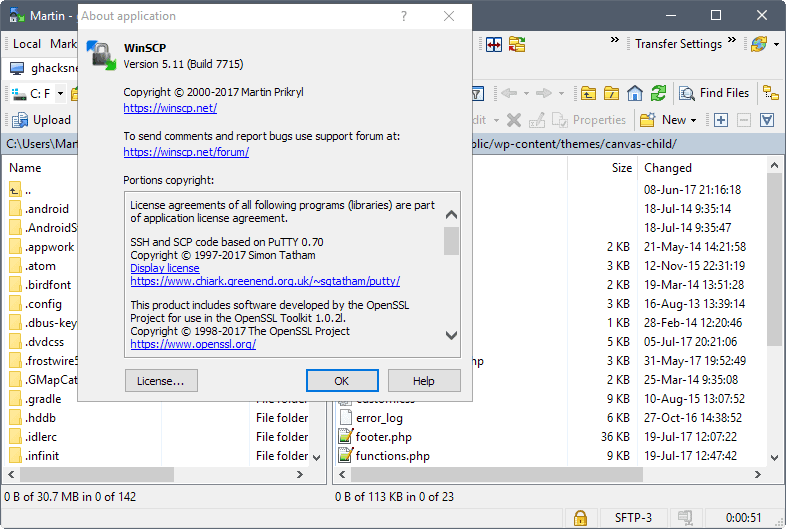 WinSCP 5.11 is a major new release of the application. While there have been three stable releases in 2017 already, all three were bug fix releases. This changes with today's release of WinSCP 5.11 as it introduces major new features.

Performance improvements when transferring files, especially a large number of files, is probably the main new feature in the release. If you have used WinSCP in the past, you may know that file transfers were not the fastest in many situations.

The reliance on using a single connection for file transfers was probably the number one thing that throttled the transfer speed.

Version 5.11 of WinSCP introduces support for multiple connections when you use the program to transfer files. A quick test revealed that it improves the speed significantly so that file transfers complete faster than in previous versions of the application.

While the feature has been designed for large batch file transfers, it works on single file transfers as well provided that they are large enough to justify the use of multiple connections.

The two remaining features are support for Microsoft OneDrive, and better support for sharing the program's configuration date with the cloud.

The new version of WinSCP supports secure connections to Microsoft OneDrive using WebDav. You find instructions on how to set this up on the official project website. Setup is not overly complicated, but it requires more steps than just entering your OneDrive credentials.

As far as better syncing with cloud storage is concerned, you find options under Storage in the preferences to select a custom INI which you may save to a folder that gets synced with cloud storage. Instructions on how to do that are found here.

Several core modules used by the program have been updated as well. This includes OpenSSL 1.0.2l, Expat 2.2.3 and SSH core and private key tools to PuTTY 0.70.

WinSCP 5.11 is a major new release that should make things a lot easier for webmasters and server administrators, and other users who transfer large number of files regularly using the program. It should take less time to transfer these files when using the program.