Tor Project's Ooniprobe app checks if you are censored

by Martin Brinkmann on February 10, 2017 in Google Android - 1 comment

The Tor Project released ooniprobe designed to run checks to see if you are being censored for Android and iOS mobile devices.

The app is designed to run a series of tests to find out about evidence of censorship, and information on the speed and performance of the network used by the mobile phone.

Before you can use it however, it walks you through a series of informational pages, a quick test that you have to pass, and a configuration page for the program's data collecting functionality.

Once you are passed all that, you are taken to the run tests page. You find the three available tests -- web connectivity, HTTP invalid request line, and NDT speed test, listed on the page. 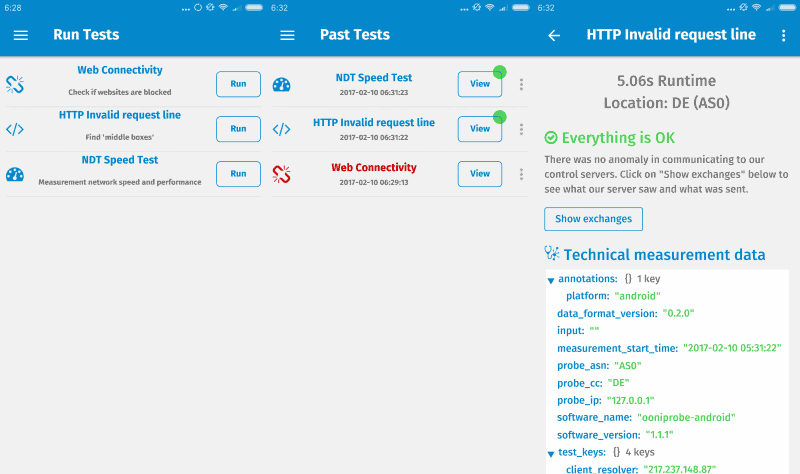 Simply tap on run next to a test to run it at that point. While you can tap on all three in rapid succession, it is probably better to run only one test at a time.

Web Connectivity attempts to connect to dozens of URLs taken from this master list.

Please note that these URLs include sites that you may not want to be linked to, or that even may get you into trouble. It includes categories such as gambling, sex, hacking, religion or P2P just to name a few.

Tests don't take long to run, and results are always shown on the past tests page which you need to switch to.

Past tests are color coded indicating whether a test was successful or failed. Red meaning that a test failed.

The screenshot above shows that the Web Connectivity test failed.

You can open the test results to find out more about what has been tested. If you open the Web Connectivity test for instance, you see the list of URLs used by the test.

Red connections indicate connection issues, while green connections worked fine. You may tap on the view button next to each tested URL to display detailed information. 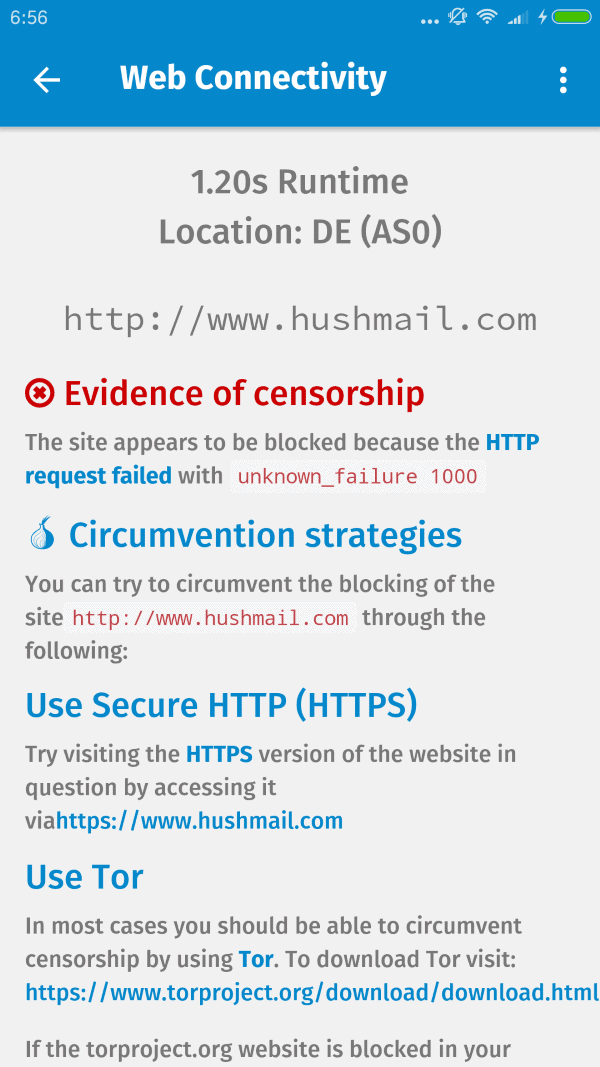 One option that is missing here is to re-run the test for that particular URL. If the test used http to connect to the site, it may suggest using HTTPS or Tor as circumvention strategies. The https link is active and you may tap on it to find out whether the site loads fine using it.

Since you may get unknown errors when trying to connect to some of these URLs, you may want to test connections again to make sure connections to these URLS are blocked and not just caused by temporary loading issues.

All connection tests that failed had an unknown error for instance on the device I tested this on. Manual tests of the URLs resulted in the sites being accessible. I re-ran the tests but unknown errors did creep up in all future tests made using ooniprobe.

This is unfortunate, as it means that you will have to test the failed sites manually to verify the findings. The lack of the re-test button makes this less comfortable than it could be.

Ooniprobe is a free app for Android that requires no extra permissions. Information on the tests is shared online, but you may select the scope of that somewhat during the initial setup phase.

The app needs a run tests connection test again button for failed URLs, but that is the only issue I encountered during tests.

The developers plan to add more tests to the application this year including WhatsApp and Facebook Messenger tests.

Now You: How did the tests turn out for you?

Martin Brinkmann is a journalist from Germany who founded Ghacks Technology News Back in 2005. He is passionate about all things tech and knows the Internet and computers like the back of his hand. You can follow Martin on Facebook or Twitter
View all posts by Martin Brinkmann →
Previous Post: « YouTube Go for Android: lite YouTube app by Google
Next Post: White Noise Baby: monitor crying, play sounds »