SideSlide is a free program for Windows devices that provides you with containers on your desktop that you may use for a variety of purposes.

If that sounds similar to Fences, it is to a degree but SideSlide is quite different in many regards.

SideSlide needs to be installed on the system, and it is up to you to start it with Windows (default option), or manually instead.

The installer itself holds no surprises, so that is good.

The program launches its widget on start. Several default containers are already placed in the widget area that demonstrate functionality or provide explanation.

Containers are empty by default, but you may add file and directory shortcuts, web links, system commands, or pictures to them.

Besides that, SideSlide supports the creation of RSS feed containers, containers that display notes or reminders, and containers that link to all files of a selected folder (the latter is limited to 250 shortcuts).

All new containers are displayed in the main interface by default. You can detach them from that interface however to move them freely around on your Windows desktop.

As far as display options are concerned, you can hide the main interface as well so that it is only displayed as a small line at the edge of the screen. Hovering the mouse over the area expands the interface again.

This is useful if you don't want the main widget to be visible all the time on the desktop.

The creation of new content containers works pretty much as expected. If you add an RSS feed, all you need to do is provide the feed URL for that.

You can then modify settings, like the update interval, directly in the container area.

You may interact with the SideSlide interface directly as well. It is for instance possible to paste text directly in the interface using Ctrl-V. 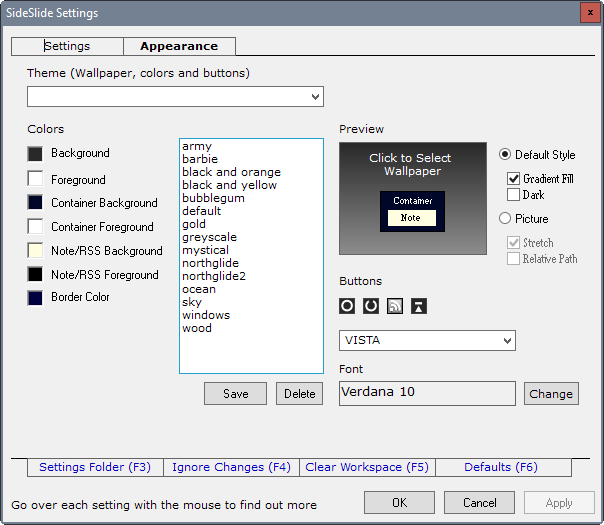 You may enable one of the themes the program ships with, or create your own theme and save it instead. As far as options are concerned, you may set colors, buttons, font, and styles for the most part using the appearance settings menu.

The color, font and icon of individual containers us customizable as well. Simply right-click the container and select the appropriate options under the view menu.

SideSlide supports a library feature that pulls container suggestions from an online source. If you select RSS and technology for instance, you get a list of technology related RSS feeds. Interestingly enough, Ghacks is displayed on the first page on that list. Thanks! 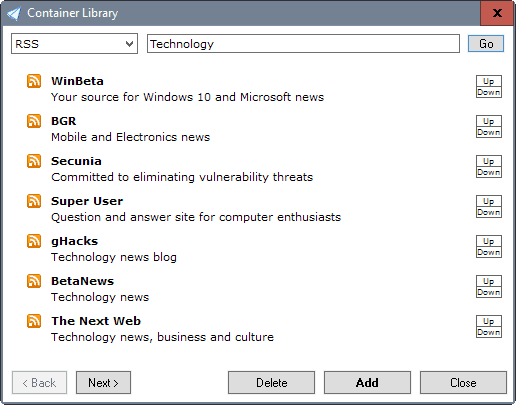 Here is a short list of additional features that the software supports in its current version:

SideSlide is one of those programs that you either love or hate. If you don't like widgets on your desktop, you probably won't like SideSlide as well as it resembles classic desktop widgets to a degree. While that comparison is not entirely fair, considering that it can be configured to get out of your sight when not needed, it won't make much of a difference to most users probably.

Now You: Do you use a launcher / SideSlide like program on your system?