Be part of "Big Brother" in Orwell

Orwell is a game about the surveillance state. What makes it interesting are a couple of things: first that you are part of the system, and second that its first episode is available for free.

You are one of the first employees that gains access to the government's new Orwell system in the game Orwell. Using it, you sift through public and private records of suspects and people, look up information, and put them all together in files.

The first episode begins with an intro that shows people eating, walking and talking to each other in a park called Freedom Plaza.

You will witness a bombing taking place on Freedom Plaza through the eyes of one of the cameras installed there, and your task in the first episode of the game is to find out who masterminded the attack and is responsible for it.

The game's interface displays Orwell on the left side, and information gathering sources on the right. Anything that you put into Orwell is evaluated by your handler who acts as a tutor in the first couple of minutes of the game. 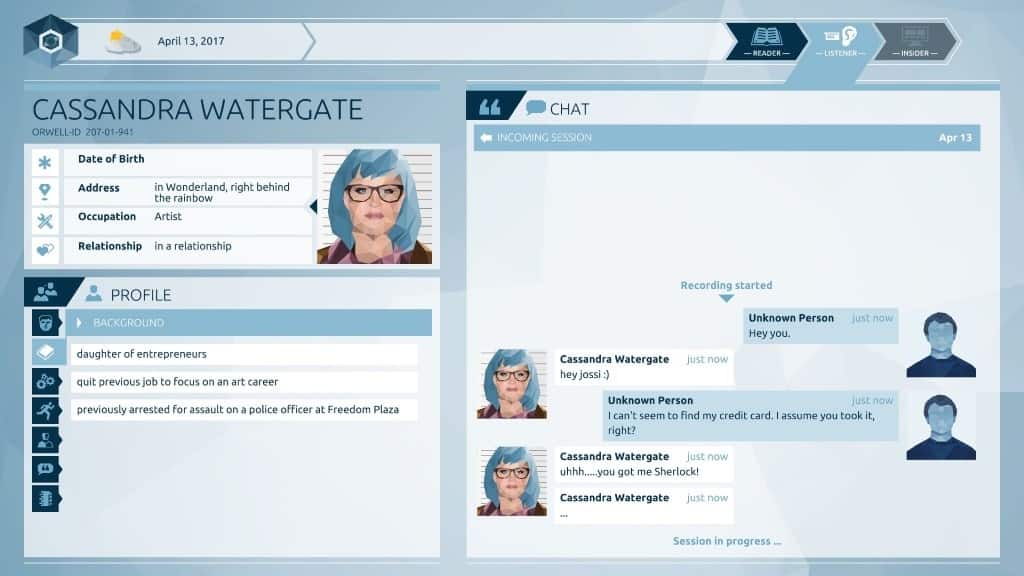 Research takes place in public and private places. Public sources, like newspapers or websites, provide you with information about people and other important data.

You may find out about connections between people, or collect valuable information such as a person's relationship status, birthday, picture, or name using them.

While that may sound like a complicated affair, it is not really. Basically, what you do is go through the sources the game provides you with. You read newspaper articles that may or may not be related to your case.

At least in the first episode, the game helps you out by underlining information that may be important. Whenever a new information source is revealed, you may drag and drop it to the Orwell interface to upload it.

One of the earlier situations where this can happen is if you drag and drop a suspects mythical address (behind the rainbow) which she mentioned on a social media site to Orwell. 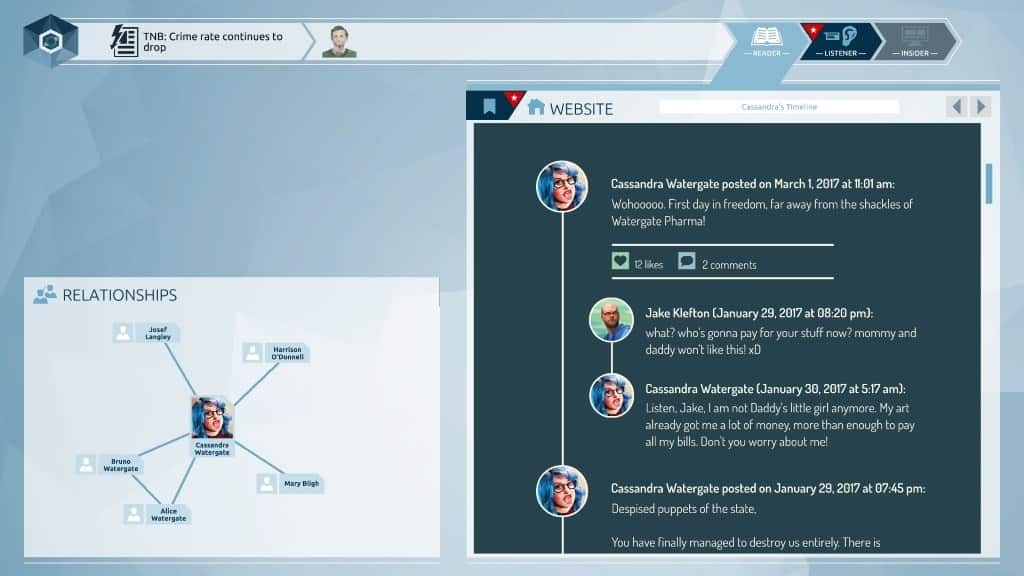 You may encounter conflicting information on top of that. The game warns you about those, and it is up to you to decide which to upload and which to ignore. Once you make a decision, you cannot undo it.

This is a bit unfortunate, as I'd wish Orwell would be more flexible when it comes to that. At least in chapter 1, those are based no logic or time, and don't require additional research.

Another related issue is that the game spoon feeds you the information. Instead of having to find relevant datachunks yourself, you get all possible hits listed right away.

Data that you feed into Orwell moves the plot along. The game won't proceed until you upload the right data to Orwell. This too is a bit unfortunate as I'd wish the world would move in real-time and not only when you act.

The free chapter of the game has you investigate information about the bombing of Freedom Plaza. The main suspect of the bombing is Cassandra Watergate because a camera picked her up shortly before the explosion and found out that she has a police record.

You begin your examination of Cassandra's life, look up her police record and personal homepage, find out about her parents and boyfriend, and monitor her messaging apps for suspicious content.

You find out that she was arrested for assaulting a police officer at Freedom Plaza, that she was not convicted, and that she quit her career in the family owned pharmaceutical company to pursue a career as an artist.

The first chapter ends after the first day which means that you won't know how it proceeds from there. The dev team has released the second chapter to Steam a couple of days ago though. The full game is available for $9.99 and gets you access to all episodes. Episodes are released one at a time and since only two are available right now, you cannot play through the whole game just yet.

Orwell limits what you can and cannot do. I mentioned already that it spoon feeds you information and that those are the only bits that you can upload.

This is the biggest gripe that I have with the game. Basic example: you stumble upon photos and other information about people linked to the suspect, but cannot upload them.

Morality is never really addressed in the first chapter either which is unfortunate. You do get to see that your uploads have consequences for people in real life, but that is the scope of that.

There is also no room for uncertainty, or false accusations in the first chapter. No dead ends, no option to start researching one of the linked people to gather additional information unless the game requires that.

While that makes it an easy to complete game, at least from what I can tell from playing chapter 1, it is nevertheless interesting because of the similarities to the growing surveillance system that nations use in many parts of the world.

There is obviously a disconnect between what the game offers and the state of surveillance in the real world. Still, Orwell offers an interesting rather unique experience and the story is interesting enough to keep me wanting to play on.

Now You: What's your take on Orwell?

Previous Post: « Gog: two-step login for all on October 24, 2016
Next Post: Call of Duty Infinite Warfare fails on PC »