Opera 41 Stable is out

The improvement in startup time decreases with a decreasing number of tabs that session restore needs to load. For a set of about 10 tabs, it is still above 50% according to Opera Software.

This is achieved by a new prioritization function that concentrates on loading pinned tabs and the active tab first on start. All other tabs open in Opera 41 are loaded with lower priority, and Opera Software notes that startup feels near instant for users when Opera is configured to load the previous browsing session. 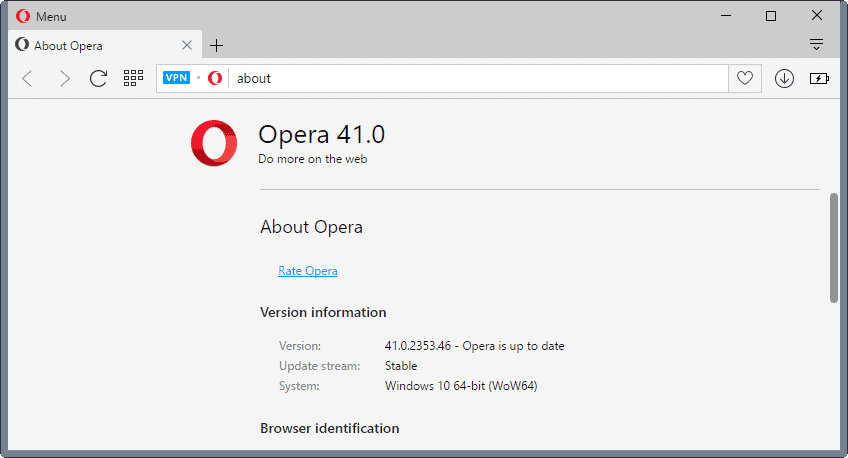 These improvements are only beneficial on systems where Opera is configured to load the previous browsing session. Users who load a single homepage on each start, or start with a blank page, won't see any of the improvements. Then again, Opera should start pretty fast on those machines already. 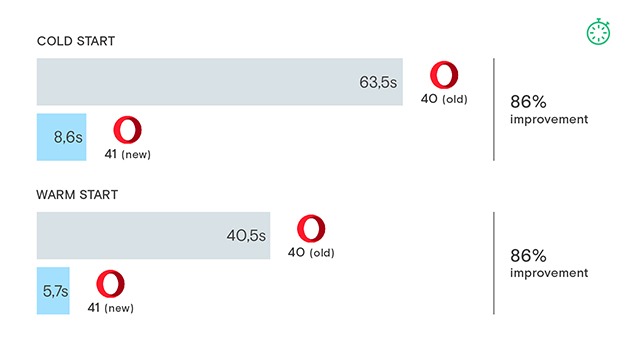 Additionally, Opera may try to limit the pixel count when in the browser's battery saving mode if possible to reduce CPU usage during video conferencing.

The second improvement benefits the browser's new video pop-out mode. As you may know, you can use Opera to pop-out videos to play them in their on little window instead of the main browser window. This allows you to play the video in a smaller play area, and continue using the browser or other programs at the same time.

The mode is fully hardware accelerated in Opera 41 which means that the CPU is used less when the mode is active. According to Opera Software, video pop-out uses roughly 30% less CPU in Opera 41.

Last but not least, several improvements went into the Personal News reader of Opera. Among the many changes are previews of feeds, options to add feeds even if the exact RSS feed URL is not known, and a reduction in recommendations.

In case you are wondering, no word on the 64-bit version of Opera Stable for Windows. Opera Software did mention previously however that it plans to launch 64-bit builds when Opera 42 Stable gets released.

Check out our Opera 41 Beta guide to find out more about the newly launched features. The guide offers instructions on how to manage these features which you may find useful if you run into issues using them.

You find additional information about Opera 41 on the official Opera Desktop blog. And if you are interested in a full list of changes, check out the changelog.

Now You: Have you tried Opera 41? What's your take on the new version?

Martin Brinkmann is a journalist from Germany who founded Ghacks Technology News Back in 2005. He is passionate about all things tech and knows the Internet and computers like the back of his hand. You can follow Martin on Facebook or Twitter
View all posts by Martin Brinkmann →
Previous Post: « Opera Max's new Privacy Mode
Next Post: Opera Max gets a nagging feature »