Firefox Nightly is the cutting edge version of the Firefox web browser that sometimes gets updated several times a day.

It is not meant for production environments, but is the first version changes are applied to and new features are introduced in.

This makes it popular with developers, Mozilla employees, users interested in early-access tech and other enthusiasts.

Nightly was offered as a US English version only on the official download site up until today. Users who wanted to grab a localized version of Firefox Nightly had to navigate the Mozilla FTP server to find that version and download it.

It comes as no surprise that more than 90% of Firefox Nightly users are using the US English version of the web browser. The main issue with it was that localized versions did not receive the same scrubbing as the US English version, and that some users would not download Nightly because they could not locate a localized version of the browser easily.

Until recently, the only way to get Firefox Nightly for desktop was to download it in English from nightly.mozilla.org or, if you wanted a build in say Japanese, Arabic or French, look for the right FTP sub-folder in ftp.mozilla.org. Nightly.mozilla.org is itself a static HTML page based on a script that scraps the FTP site for builds periodically.

Of course, as a result, about 90% of our Nightly users use an en-US build. The few thousand users using a localized build are Mozilla localizers and long term contributors that knew where to search for them. We were clearly limiting ourselves to a subset of the population that could be using Firefox Nightly which is not a good thing when you want to actually grow the number of nightly users so as to get more feedback (direct and anonymous). 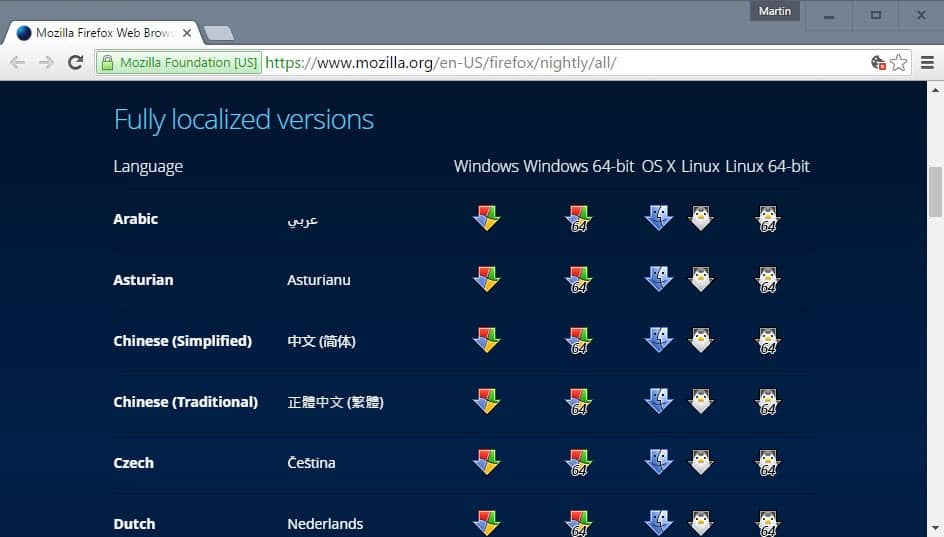 The new Nightly download page changes that, as it makes Firefox Nightly available in fully localized versions right on that page.

The page looks similar to the download pages of the other Firefox download channels. Basically, what you get is a list of languages and next to it download buttons for the supported operating systems.

These are at the time of writing Windows, windows 64-bit, OS X, Linux, and Linux 64-bit.

In case you are wondering why it took so long to get a proper download page for Firefox Nightly. According to Mozilla, one reason why the organization could not offer a download page similar to those of the release, beta and dev channels of Firefox was technical.

The page will be linked to from the Nightly site eventually, but that is not the case currently. Mozilla is working on that though.

Making Nightly available in localized languages, or at least making downloads for these localized builds easier to find, will certainly increase the number of users who will give Firefox Nightly a try.

Now You: Which localized version of Firefox are you running, if any?