OpenStreetView is a free crowd-sourced service by OpenStreetMap that offers street imagery that users of the service push to it while using it.

OpenStreetMap is an open source alternative to Google Maps, Bing Maps and other mapping services. The new OpenStreetView however works different than services like Google StreetView despite the naming similarities.

The service uses imagery that users of it are providing instead of capturing street views using company cars in all regions of the world.

This means that you won't get a full view of a street, but only image captures. Also, the service does not cover all areas yet which means that you may not get imagery in many areas around the world.

That's going to change though when more and more users start to use it and push recorded images while driving to OpenStreetView. 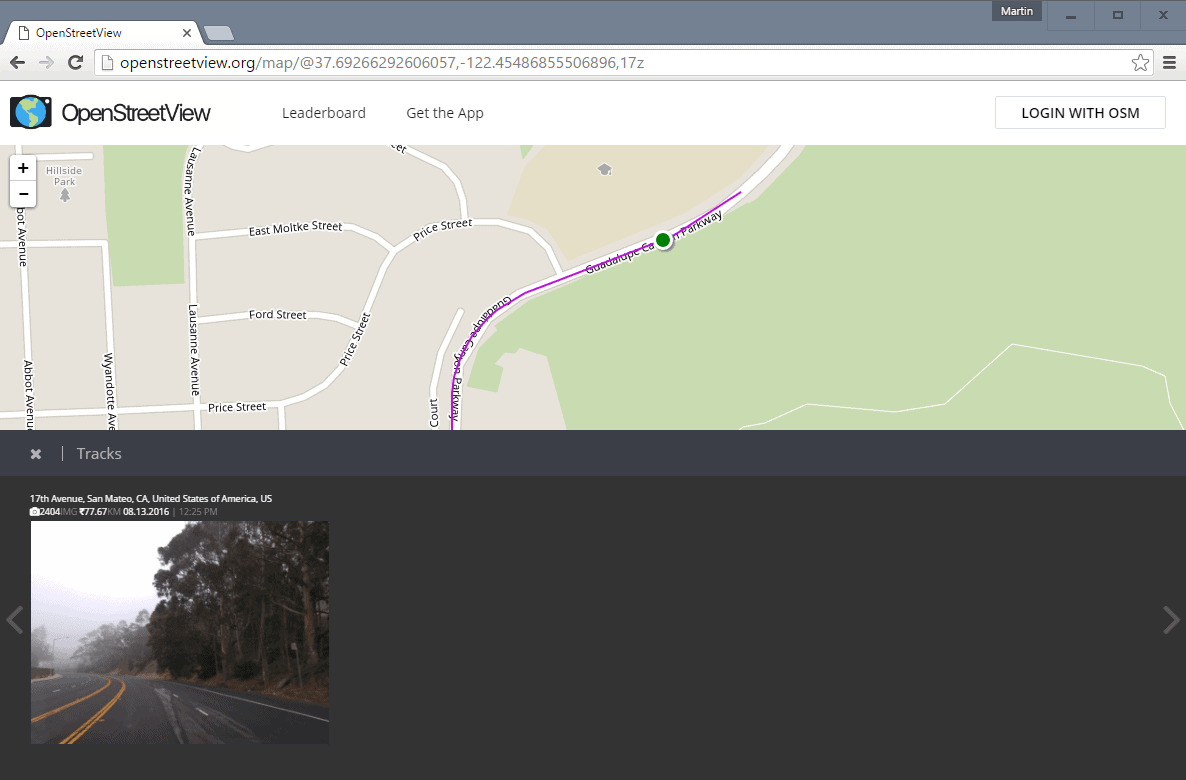 The approach has two advantages over comparable services. First, you may get multiple shots of the same area and not just one. Second, and that is related to the first, shots are taking at different dates which means that you get to see an area at different times.

Also, the data may be more up to date because of the approach. If Google or Bing want to update the data, they need to get cars to move around in the area again to do so. It happens that street view data is severely out of date because of this.

While this may also happen with OpenStreetView data, there is at least a chance that this won't happen if a driver happens to drive around in an area regularly.

You can load OpenStreetView in your browser. The map highlights all areas with street imagery in pink, so that you know where imagery is available and where it is not.

The coverage of San Francisco is particularly good already, but you will notice imagery in Europe as well already. This is limited to highways and interstates mostly though right now. You may also notice that some imagery is upside down. This is caused by users not paying attention to the position of the smartphone.

Mobile apps are provided for Android and iOS that users who want to contribute can use to create imagery and push it to OpenStreetView servers so that they become available to all users of the service.

OpenStreetView is an interesting service that crowd-sources street imagery. The approach is the only feasible solution for services that are not backed by companies with multi-billion Dollar budgets.

While coverage depends largely on users, OpenStreetView may come to a point eventually where its imagery is superior to competing services thanks to it being fresher.

Article Name
OpenStreetView launches
Description
OpenStreetView is a free crowd-sourced service by OpenStreetMap that offers street imagery that users of the service push to it while using it.
Author
Martin Brinkmann
Publisher
Ghacks Technology News
Logo

Martin Brinkmann is a journalist from Germany who founded Ghacks Technology News Back in 2005. He is passionate about all things tech and knows the Internet and computers like the back of his hand. You can follow Martin on Facebook or Twitter
View all posts by Martin Brinkmann →
Previous Post: « Iridium: privacy-focused Chromium-based browser
Next Post: Internet Connection speed tests with HTML5 »