Why I read only user reviews with average ratings - gHacks Tech News
ghacks.net

Why I read only user reviews with average ratings

Reviews can be very helpful before you make a purchase on the Internet or even locally. They may help you understand the product better, or prevent you from making a decision that you might regret at a later point in time.

This goes for reviews by critics but even more so by users. Some sites, most shopping sites in fact, publish only user reviews while others, Metacritic for example, list critic and user reviews.

Most user reviews come with ratings. While the rating scheme is different from site to site, some use thumbs up or down, others a 5, 10 or 100 point rating scheme, most use ratings, and sometimes even ratings for users who left a review.

The aggregate score of an item is important, especially on shopping sites but on other sites as well. Customers use the ratings to pick items, and companies try to get positive ratings and reviews as it helps them improve the visibility and click-through rate of their products on those sites.

The user review system on most sites is broken. If you check out any review on Amazon or any other site that lets users rate items, you will likely notice the following: the majority of users either rate an item very low or very high.

Take Blizzard's new game Overwatch for instance. If you check Metacritic user reviews, you will notice that the majority either awarded the game a 9 or 10 score, or a 0 or 1 score (with more high-end ratings than low-end ones).

While there is nothing wrong with giving a game such a rating, the reviewers fail more often than not to explain why the product deserved the rating.

I'm not saying that there are not good reviews among the high or low raters, but more often than not, you get ratings that are not backed up by the review itself. 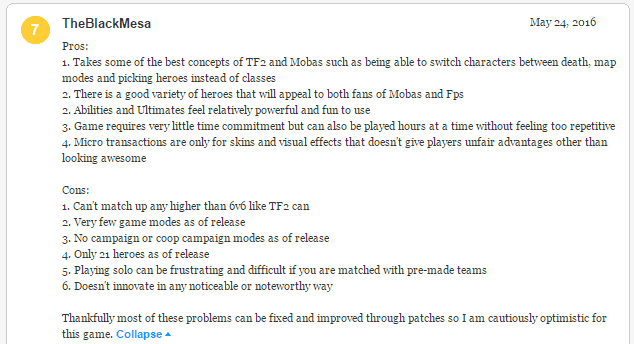 That's why I started to look at reviews with average ratings almost exclusively. Unlike "the item is the best ever" or "this item is the worst ever" reviews, they are usually weighted which means that you get positive and negative aspects mentioned in the review.

If you consider buying an item, it is average reviews that will help you the most when it comes to making an educated decision.

I'm by no means saying that all reviews that hand out godlike or awful ratings are not worth reading, but more often than not, they either provide no value at all, or seem hell bend on justifying the reviewer's own agenda.

The same holds true for average reviews. You may find bad reviews among them too but the percentage seems a lot lower.

Also, and this problem is found most often on shopping sites, concentrating on average reviews helps sort out paid reviews that give products perfect ratings.

Now You: Do you read user reviews when you shop online?