Configure Microsoft Translator for Android for offline use

by Martin Brinkmann on February 19, 2016 in Google Android - 3 comments

Microsoft Translator's latest feature on Android adds offline translation capabilities to the application.This means that Android users can use it in situations where Internet is not available at all, or not reliable enough to send and receive data from a server when it is needed.

The app ships with English offline translation by default but you may add other languages to the app.

The following guide walks you through the steps of adding offline language packs to Microsoft Translator for Android so that you can translate these languages using the application without Internet connection.

Note: Google added offline support to its Google Translate application back in 2013.

We are pleased to introduce today the world's first Deep Neural Network-powered offline engine, available in the Microsoft Translator app for Android. By downloading free offline packs, users can get near online-quality translations, even when they are not connected to the Internet. 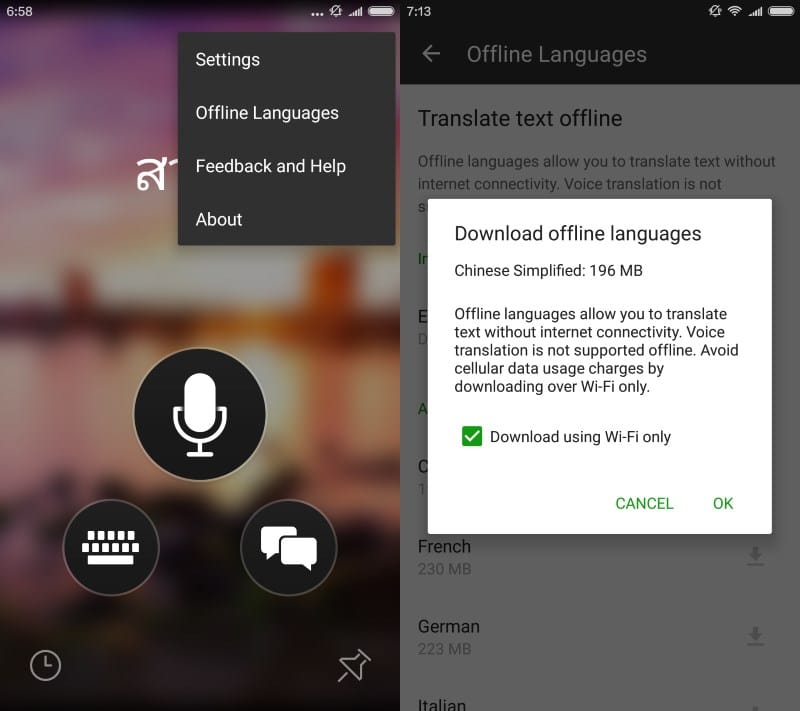 First thing you need to do,if you have not already, is to download and install the Microsoft Translator application on your Android device.

The app is available free of charge at the official Google Play Store.

Open the application afterwards, and tap on the three dots in the upper right corner. The context menu displays options to open the settings, and to access the new offline languages configuration page.

Offline language packs have a size between 181 and 230 Megabyte each, and may take a while to download depending on your Internet connection. If you are on a limited plan, it may be best to download these packs when the phone is connected to a Wi-Fi network.

Offline languages allow you to translate text without Internet connectivity. Voice translation is not supported offline.

As Microsoft notes on the page, offline languages allow you to translate text only while other features such as voice translation are not included.

At least some users are experiencing a bug right now which prevents them from downloading language packs to their device. The selected language is added to the list of installed languages after the prompt, but it is not downloaded. You will notice this when you leave the configuration page and go back to it afterwards, as the selected language is not listed under installed anymore then.

The language selection is rather weak at this point especially if you compare it to what Google Translate offers for offline use. Microsoft promised to add more offline languages soon to the Android application but did not provide a time frame nor a list of languages that it plans to add to the app.

Choice is always a good thing and the introduction of language packs to Microsoft's Translator application move it closer to Google Translate on Android. The language selection is limited currently however.