The free application Popcorn Time made big waves when it was first released. Depending on who you'd ask, it was either the future of watching content on the Internet or yet another tool to stream movies illegally to users from all over the world.

The app combined a movie browser, media viewer and torrent client in a slick great looking and working interface, something that the media industry failed to deliver for years even if you take away the torrent part of the equation.

The original version of Popcorn Time was taken down rather quickly but forks quickly filled the void with several applications being released using the technology.

Update: Browser Popcorn has been taken down. It is no longer available.

Browser Popcorn takes the core Popcorn Time concept and moves it to the web. It requires a modern browser but that is all that is needed to start streaming movies to your location.

Unlike apps that are based on Popcorn Time, it is not using user systems to torrent media files selected in the app according to its author. Instead, it is downloading the torrents and streaming the contents to the user while it is doing that in the background. 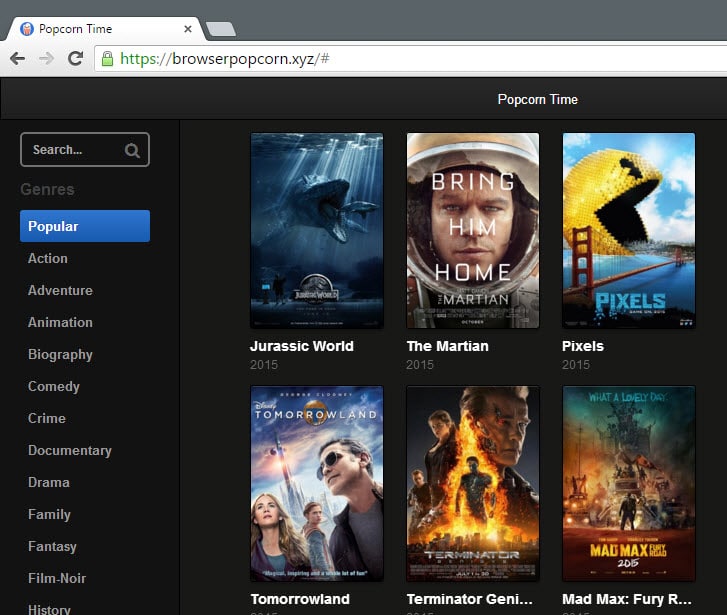 If true, it would mean that users would not torrent these media files directly which would move them out of harms way at least when it comes to the monitoring of torrent downloads. Obviously, there are other ways to obtain data about users who use the streaming service.

The service itself lists movie categories on the left, and a selection of movies on the right. Each movie is listed with a poster shot, its name and release date. When you click on it a sidebar opens displaying options to watch the movie and to read a short story synapses.

There is also a search that you may use to find movies of interest but that is about it. What you don't get are different qualities right now, options to watch movies in different languages, or subtitles. Subtitles at the very least will be included soon though according to the creator of the site.

You are probably wondering how long it will last. I would not get my hopes up that the service is still around for Christmas.

Now You: Would you use a service like Browser Popcorn?