The former is a set of critical system variables like the path of the Windows directory or the command line interpreter that is being used while the latter defines variables set by a particular user either by setting them directly or installing programs on the system that made the modifications for the user.

While it is usually not necessary to modify these variables often, you may have come into contact with them after installing Java or another program that made use of these environment variables.

The default Environment Variables editor of Windows lacked heavily in the usability department, mainly because it displayed values in a single line editable interface that was limited in length.

This meant that you had to scroll horizontally to read the whole path information and to edit them which increased the chance of errors significantly. 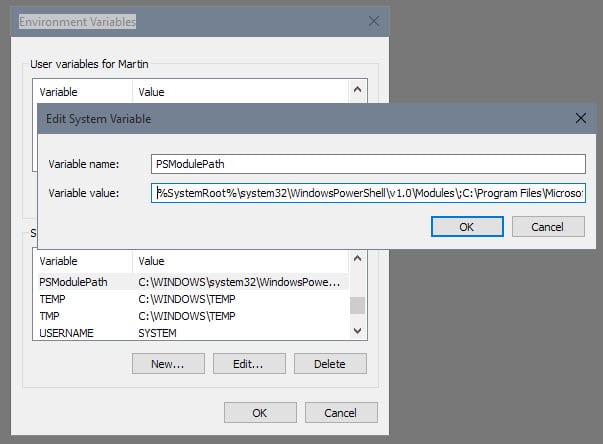 As you can see on the screenshot above, the data displayed in the variable value field exceeds the available width of the field.

That's why many users installed programs such as Rapid Environment Editor instead which not only improved the editing interface but did add features such as the highlighting of broken information to the process.

If you have installed the newest version of Windows 10, build 10547, which you can only install if you have joined Microsoft's Insiders program and have configured the system running Windows 10 to be on the Fast Ring in regards to updates, then you may have noticed a new interface for editing  Environment Variables. 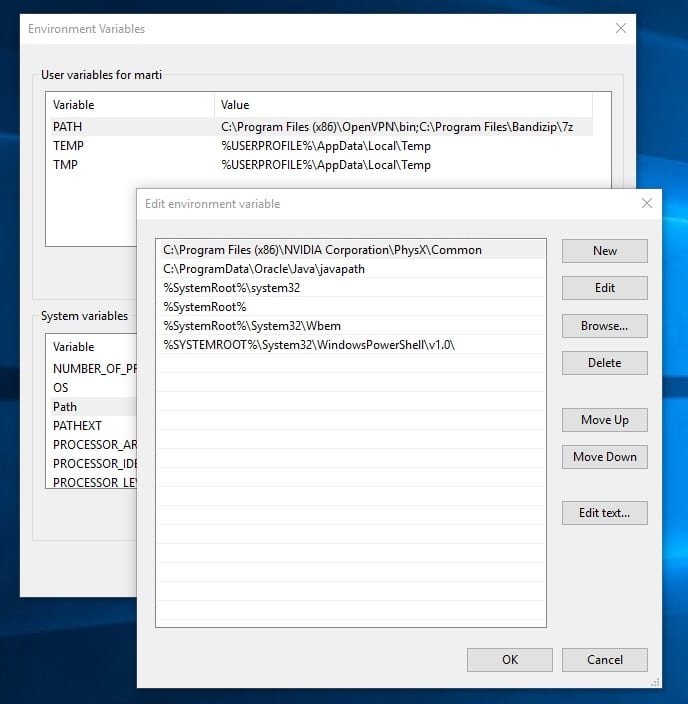 The main interface that lists the user and system variables is a bit wider, but the real change becomes visible after you hit the edit button to edit values of a variable.

Instead of listing them all in a single line, each is now listed in its own line making it a lot easier to edit, remove or add data to user or system variables in Windows 10.

The new editor lists other options of interest. First, it allows you to move entries up and down to change their order which the old editor lacked completely. This meant that you had to use copy, delete and paste previously to move variables around.

Second, you may use buttons to add, edit or delete information, and third, you may use the browse button to add a new folder this way directly.

The edit text button displayed in the interface opens the old Environment Variables editor so that users who prefer it can still make use of it.

The new Environment Variables editor improves the handling of user and system variables significantly. While it may not matter much or at all to casual users, it will make the editing more pleasant for users who come into contact with it regularly. (via Reddit)

Martin Brinkmann is a journalist from Germany who founded Ghacks Technology News Back in 2005. He is passionate about all things tech and knows the Internet and computers like the back of his hand. You can follow Martin on Facebook or Twitter
View all posts by Martin Brinkmann →
Previous Post: « Microsoft restores Personalization menu in Windows 10's Control Panel
Next Post: Use PowerShell to manage Scheduled Tasks in Windows »