MovieDay for Android keeps track of upcoming movies for you

by Martin Brinkmann on September 14, 2015 in Google Android - 1 comment

If you like to watch movies, you are probably keeping an eye on upcoming movies that you are interested in.

Maybe it is one of the new Star Wars movies that is coming out, the next Marvel flick or something completely different.

Whatever it is, you may find an app like MovieDay for Android useful as it assists you in keeping track of all the upcoming movies you are interested in.

The app requires no extra permissions during installation, something that is always nice to see.

It loads a blank screen on start and it is up to you to use the built-in search to start adding movies you are interested in to the list or browse a list of upcoming movies instead to add them this way. 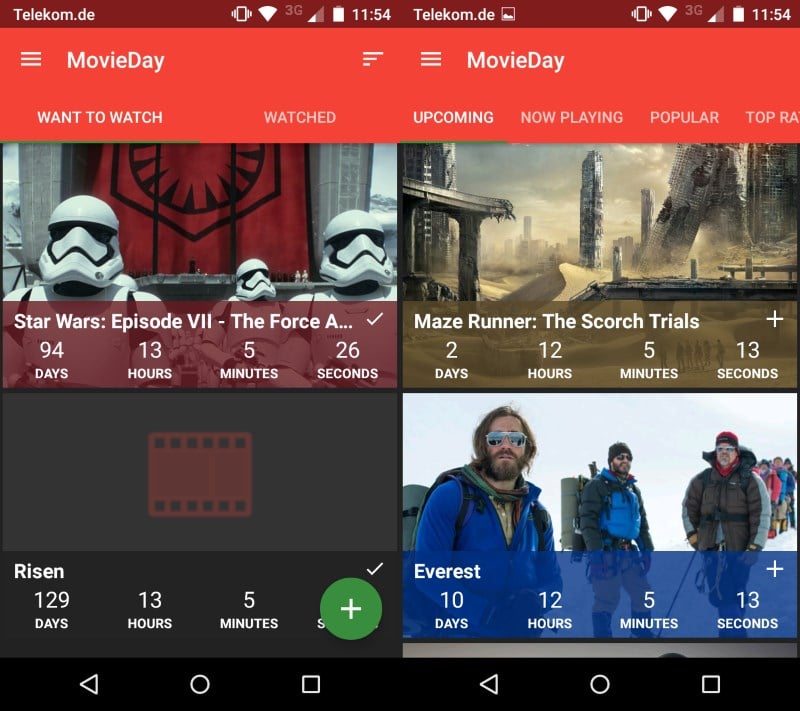 The search works exactly as you would expect it to. A tap on the plus icon opens the search menu which displays results on the screen based on your search phrase as you type.

One issue that you may encounter at this point is that the app lists past, present and upcoming movies in the results which does not make a whole lot of sense considering that most users may not want to keep track of movies that have aired already.

To use the Star Wars example, you get all six previous movies plus The Force Awakens and other upcoming movies such as Star Wars VIII, Star Wars IX and even fan made movies.

The app keeps tracks of movies that you want to watch and watched movies, and this is probably the main reason why past movies are displayed in the search results.

While some may find this handy, most may not want to use the app for keeping track of movies they have already watched as there are better applications for that.

The browse option displays various movie lists including upcoming, now playing and popular. The upcoming list displays only movies that are yet to come out while all other lists display movies that can already be watched in theaters across the country.

The app focuses on the US market exclusively which means that it is of less use if you are not living in the US. There is no option provided currently to switch the setting to another country.

You may want to take MovieDay for a test ride if you live in the US and like to watch movies in theaters. The app has its uses if you are not living in the US, as most movies will get released eventually in other countries as well albeit not necessarily on the same day.

Previous Post: « Android Pay and Google Wallet update rolling out in the US
Next Post: Android's 5.x Lock Screen may be bypassed by attackers »