The new version introduces a search function, optional columns to display additional information in the program interface and an option to hide offline devices in the My devices list.

The update has been released for all supported desktop operating systems and both free and pro licenses.

The new search is probably the biggest new feature that the update introduces. It is available at the top and enables you to search folders, users and devices.

If you search by user for instance, you get a listing of all folders that the particular user is linked to. As you may have noticed already, file search is not supported which seems strange as you are left with using the operating system for that. 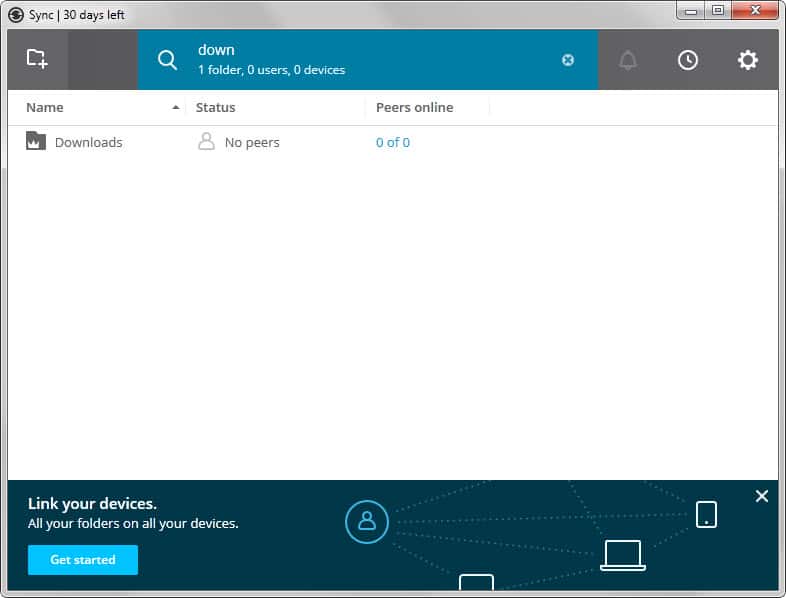 It would make sense to include file search directly in the program as well, for instance to quickly launch specific files right form it.

Since files are not included, its use increases with the number of folders, users and devices that the software manages for you.

If you just use it to sync between two of your devices, it may not be beneficial at all but if you use the Pro version with hundreds of folders, users and dozens of devices, then you will benefit from it as it enables you to quickly jump to specific items.

The two new columns owner and last transferred can be added to the interface with a right-click on the header and the selection of the items in the menu.

There you find additional items that you can activate, for instance information about data transfers, dates when a folder was added or synced, or the path of it on the local system.

The final feature addition enables you to hide offline devices on My Devices which you access with a click on the settings icon in the top right corner of the screen.

This can be useful to remove old devices from the list of devices, for instance if you no longer use them.

The full changelog lists additional improvements and fixes in this release. For instance, the settings you make in a folder's share dialog are now remembered the next time you open it.

New context menu icons have been added to the native file explorers on Windows and Mac systems. A preference to remove these menu items is not provided right now which means that you need to use a program like ShellExView for that or remove the modifications manually.