System optimization tools and apps are fairly popular on desktop PCs but also on mobile devices. They promise to free up space, memory or remove privacy-related information from the device they run on.

Avira Android Optimizer is a new application for Android by Avira that can be best described as a system optimizer as it includes various options to clean and optimize the system.

The application displays the current state of the system on start. There you find listed the available memory and storage, as well as cleaning projections so that you know how much memory or storage you can free up by running the application's cleaning tools.

If you are in a hurry, you can use the one tap boost option to run an automated optimization of the system. 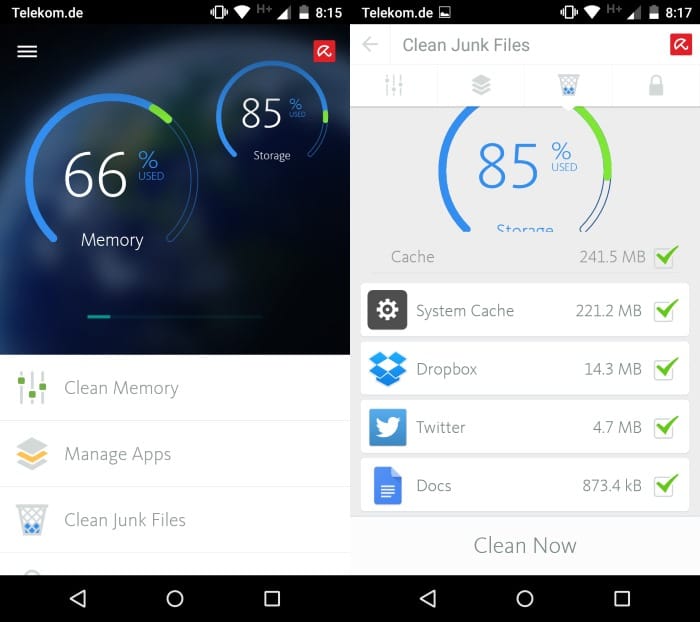 While that may be convenient, you are left in the dark as to what is actually done to achieve that. Android Optimizer displays that the device has optimized in the end, modifies the memory and storage information accordingly and that is about it.

If you want control over the process, you should load the tools provided individually instead as it is up to you then what gets optimized and what does not.

Android Optimizer is a stable program that worked well on the tested device (a Moto G). With that said, it does not provide anything that other applications of its kind don't and there is little reason to switch because of this.

If you are not running a system optimizer on the other hand and want to run one, then there is nothing that speaks against selecting it for that purpose.

The application could use a couple of optimizations itself. The one tap boost feature should inform users about what it optimizes, at least on first run to inform users what is done in the background.

Martin Brinkmann is a journalist from Germany who founded Ghacks Technology News Back in 2005. He is passionate about all things tech and knows the Internet and computers like the back of his hand. You can follow Martin on Facebook or Twitter
View all posts by Martin Brinkmann →
Previous Post: « uBlock for Firefox mobile now available
Next Post: Privacy Look adds disk wiping unlock code to your Android device »