Y++ for Firefox turns YouTube into an endless stream of video

YouTube is without doubt the most popular video hosting website on today's Internet and it is unlikely that this is going to change anytime soon even if heavyweights such as Yahoo are entering the niche with their own solutions or attempt to push existing ones.

One of the things that I like to use YouTube for is music. Both to look up classic music tracks that I'd like to listen to again as well as music discovery.

When you play a music track on the site you get a sidebar full of suggestions which can be useful in this regard. YouTube's new autoplay feature may help as well even though it is rather controversial.

Y++ is a free extension for the Firefox web browser that offers a simple solution when it comes to playing as many YouTube videos as you like in one session.

Once installed you can press on the extension icon to open a special page on YouTube to start the playback. 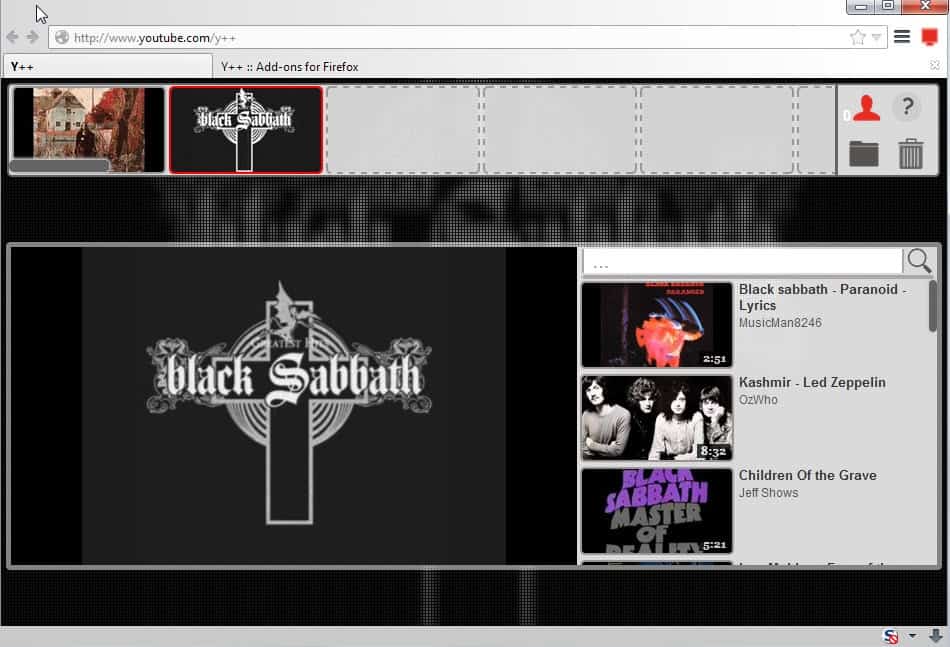 You will notice a video bar which acts as your own personal playlist of videos. You can use the built-in search to add videos to it but even if you don't, you get an endless stream of videos.

First thing you may want to do is to search for something of interest. Maybe you like Justin Bieber, Metallica or C-64 SID sounds. Whatever it is, the search results are populated instantly and a click on one of them starts to play that video right away.

It is up to you to lean back and leave the page on its own or populate the playlist area with additional videos that you want to listen to.

When I started with a Black Sabbath song for instance, it would load other songs of the band automatically. It switched to other bands later on such as Led Zeppelin or Deep Purple. The same was true when I started to play Commodore Amiga music videos where the extension switched to C-64 SID music videos later on.

While that is ideal for playing music videos non-stop on YouTube, it can be used for other types of videos as well as long as it is the audio that you are after.

One thing that you may run into however is the dreaded "this video is not available in your country" message. There is little that you can do about it but it is problematic as it will stop the video stream which means that you need to open the tab and skip the video manually.

You can use Y++ to save playlists outside of YouTube. Just add as many videos as you want to a list and click on the folder button in the interface afterwards to open the save dialog. Once saved, it is possible to open and play the list of videos again.

Y++ is without doubt an interesting extension for the Firefox browser. If you like YouTube and want to listen to an endless stream of videos or create your own playlists without having to create an account on the site, then you may want to give it a go as it delivers that.

Previous Post: « Search this site (and many others) directly from the Firefox address bar
Next Post: Mozilla starts to push Reader Mode to desktop Firefox »