VLC for Android now available as a stable app

VLC Media Player for Android has been available as a beta application for some time now.  The app supports many of the features of the famous desktop version of VLC including out-of-the-box playing of many video and audio formats, support for DVD ISO images, a media library, and support for subtitles and multi-track audio.

Some features however are not ready or available at all in the beta; this includes hardware decoding on most devices for example, a feature that improves playback performance by using the capabilities of the device's hardware.

Videolan, the company behind VLC has just released VLC for Android stable. The confusing thing about the release is that the company released a new app and did not update the beta app to stable.

This means that users who run VLC for Android beta don't get the update to VLC for Android. What's even stranger is that the beta app is at a lower version (0.9.10) than the stable version (1.0.1). This is likely to change in the future if Videolan keeps both applications alive in the store. The company could push updates to the beta channel first for testing before they land in the stable application.

One explanation for that is that Videolan stopped working on the Beta and switched development resources over to the Stable version to create the initial release. 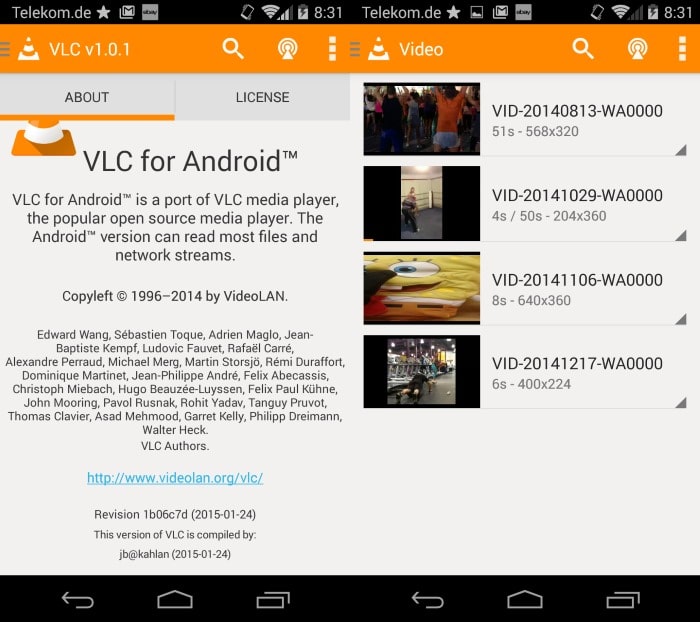 As far as differences are concerned, both applications are very similar. They run on all Android 2.1 and up devices and support the same feature set more or less.

It appears that hardware decoding works on most devices now as it is not listed as an issue anymore on the Android for VLC (stable) page.

There have been quite a few changes between version 0.9.10 and 1.0.1 though as you can see when you open the changelog. Apart from minimum Lollipop support, remote DVD navigation and several crash fixes not much.

Beta users who want to switch to stable need to download and install VLC for Android now to do so as there is no built-in upgrade option available in the beta version to do so.

So, if you want to use the stable version instead from now on you need to head over to Google Play to download it from the store.

The media player should play most formats that you throw at it without any issues. Supported formats include Android native media formats but also popular formats such as mkv.