by Martin Brinkmann on January 29, 2015 in Software - No comments

Unless you run software that logs all local and remote connection attempts, you don't really see what is going on when you connect to a website or run a program on the local system that connects to the Internet.

A powerful program to analyze web traffic is Fiddler. While it is great, it is rather complicated to use thanks to its impressive set of features.

The company behind the product has created FiddlerCap as a complementary program for Fiddler. You can use it on its own without using Fiddler at all but it has specifically been designed for inexperienced users who can save their web sessions with just a couple of clicks.

The program displays a basic interface on start that you use to start, stop and save captures. It displays several options in the interface which you can modify before starting a capture session. 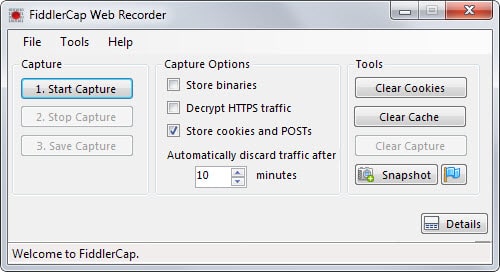 This includes whether HTTPS traffic should be decrypted or cookies stored. The program works automatically in browsers that use the Windows System Proxy. This includes Internet Explorer, Google Chrome and most Chromium-based browsers.

Firefox users need to make sure that "use system proxy settings" is enabled in the browser.

All web traffic is captured by FiddlerCap once you click on the start capture button. You can display details about the recorded traffic with a click on the details button.

There you see the protocol, host and path listed as well as the connection status of each connection that is made. This is similar to what the integrated Developer Tools of Firefox, Chrome or Internet Explorer display when they are opened.

You do get options to create snapshots (screenshots) as well which are added to the log automatically. Other options include clearing cookies or the cache, and to clear the capture up to that point.

Captures run for 10 minutes by default but you can stop them at any time manually as well.

Once you are done capturing, you can save the capture to the local system. Fiddler can load that file so that the traffic log can be analyzed in detail using the application.

The main idea is to ask end-users to use FiddlerCap to create a log file to load it into Fiddler then to analyze it.

This can be useful if web visitors notice issues when they are using a website, for company employees in the local Intranet, and also for private analysis of sessions if you are asked to find out what is wrong.

Martin Brinkmann is a journalist from Germany who founded Ghacks Technology News Back in 2005. He is passionate about all things tech and knows the Internet and computers like the back of his hand. You can follow Martin on Facebook or Twitter
View all posts by Martin Brinkmann →
Previous Post: « Manage and block Windows autostart items with Safe Startup
Next Post: Startup Manager Autoruns 13 introduces Virustotal integration »