The programs core feature is backup, and when you start it up for the first time you see the options that it offers in this regard.

You can backup and clone entire hard disks or partitions, and recover them at a later point in time. There is also a file and folder backup option in case you only want to make copies of select files instead.

The difference between backing up a partition and cloning is that the latter will clone a source partition by writing it to another partition, while the former simply saves the partition to a connected storage device.

If you select the regular disk backup option, you get to choose the source and destination partition right away. Additional settings are provided as well with a click on the options button which allow you to change the compression level, split images, or define commands to run before or after the backup. 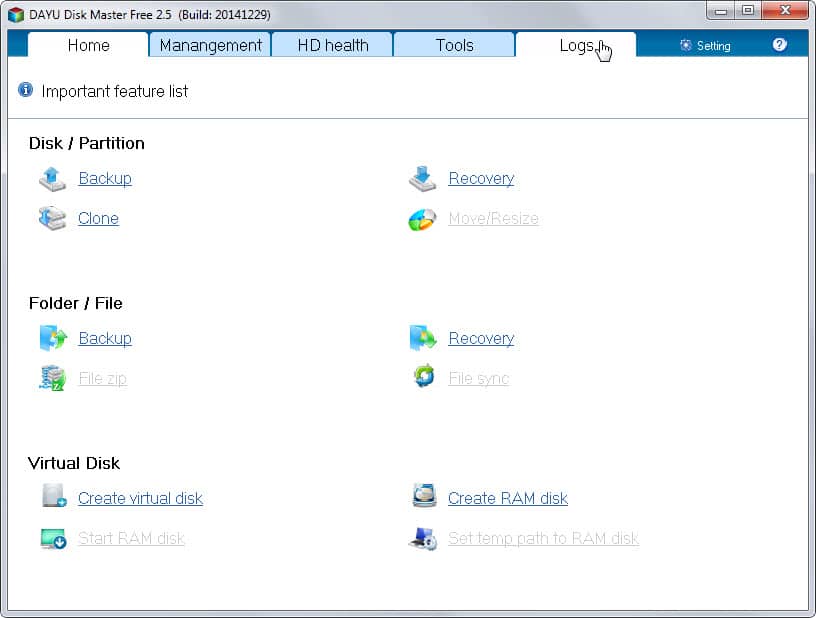 Some options are grayed out and not available in the free version. Probably the most important one is encryption which allows you to password protect the backed up data. You can overcome that by storing the backup in an encrypted container or partition.

The program supports incremental and differential backups as well as sector by sector copies and VSS. The disk recovery option can be used to migrate the current system to a new hard drive without reinstalling Windows according to the company.

File and folder backup works similar to that but with the difference that you select the files and folders that you want backed up.

First thing you want to do after creating your first backup using the program is to create a system rescue disk. This is done under tools in the Disk Master Free interface.

You can either save it directly to a USB drive or export it as an ISO image that you burn to optical disc or copy to a bootable USB drive afterwards.

Disk Master Free offers additional options besides creating and restoring backups. You can use it to create virtual disks and RAM disks as well.

If you select RAM disk you get options to create a virtual disk residing in memory. Options are provided to save the RAM disk data so that it persists across sessions, and to select the size of it and its drive letter. 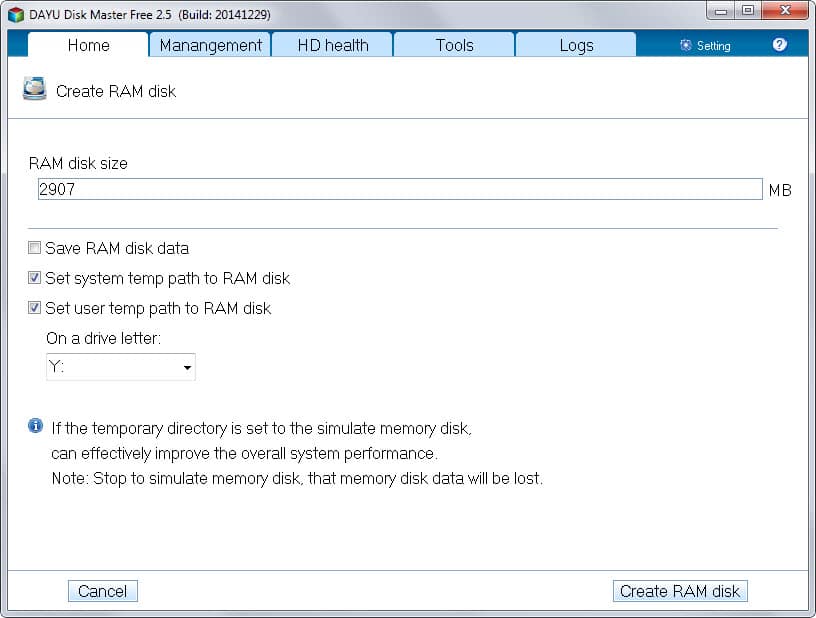 The virtual disk on the other hand simulates a physical hard drive. The free version is rather limited in this regard as it does not allow you to encrypt the disk, does not support 512-byte sectors and over 2 Terabyte disks.

HD Health is the final tool that ships with Disk Master Free. It displays SMART values for hard drives that support them including temperatures, supported features and detailed model and technical information.

There is also a log file that provides extensive information and filters which you can use to look up operations.

The free version of Disk Master offers quite the selection of backup and disk management tools. While some of the features are limited, most are nearly unrestricted in the free version and others can be overcome through other means.

Some features, scheduled backups for example, are unfortunately not supported by the free version which means that you have to run backup jobs manually whenever the need arises. You will also find several spelling mistakes in the interface.

DAYU Disk Master Free all in all is a solid program offering an impressive set of features for a free program.

Martin Brinkmann is a journalist from Germany who founded Ghacks Technology News Back in 2005. He is passionate about all things tech and knows the Internet and computers like the back of his hand. You can follow Martin on Facebook or Twitter
View all posts by Martin Brinkmann →
Previous Post: « WinCompose: use keyboard shortcuts to write special characters
Next Post: VeraCrypt update brings TrueCrypt volume support »