Firefox is not only available for desktop systems but also for mobile operating systems such as Android (and probably iOS as well in the near future).

This means that Firefox users can sync their data, passwords and bookmarks for example, between devices so that they are available everywhere.

While it is possible to sync passwords and make use of them, and to save new passwords to Firefox for Android, password management itself is not available right now.

What this means is that you cannot delete or edit passwords, or even display them all in a list in the mobile version.

Mozilla plans to change that and has made password management one of the organizations top-line initiatives for 2015.

Some of the planned improvements are already visible in the most recent Nightly version of Firefox for Android. If you load about:passwords in the address bar of the browser, you get a list of all passwords stored in Firefox. 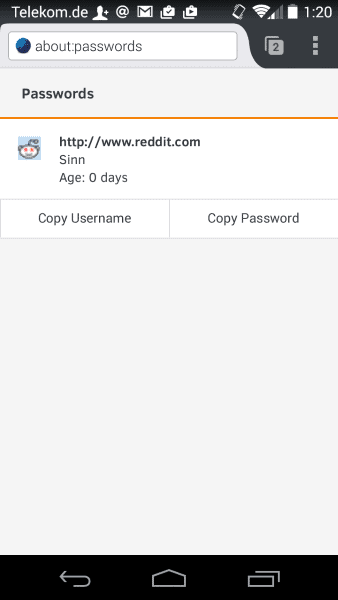 This includes passwords that the mobile browser picked up while you were using it but also synced passwords if you have enabled sync on Android and on another system where Firefox is used on.

Each password is listed with its address, the site's favicon and username by default. A tap on an entry displays the age of the if and options to copy the username or password to the device's clipboard.

This can be useful if you need to enter the username or password in another application and not in the browser directly.

While that is a great start, you will realize that some features are still missing. You cannot edit or delete data sets right now for example, there is no search provided to search for specific accounts quickly, no sorting options, no manual adding of passwords and as you have noticed already, no direct link to open the password management page other than entering its address directly.

Considering that the feature landed in Nightly, it is fair to say that Mozilla will add these features and others to the password manager before it lands in the stable version of Firefox on Android.

Plans are there to improve it significantly beyond what has already been mentioned. Some of the features that Mozilla considers adding include support for dynamic login forms and multiple user and password fields, support for using the same credentials on different domains belonging to the same company (e.g. Amazon.com, Amazon.co.uk and Amazon.de), or different accounts on the same domain.

It is about time that Firefox for Android gets password management capabilities. While I'm not using built-in password managers on the desktop or on Android, it is certainly an improvement for users who do. Not being able to delete passwords for instance is a serious usability issue. (via Sören Hentzschel)

Now You: Are you using a password manager? If so, which? If not, why not?

Martin Brinkmann is a journalist from Germany who founded Ghacks Technology News Back in 2005. He is passionate about all things tech and knows the Internet and computers like the back of his hand. You can follow Martin on Facebook or Twitter
View all posts by Martin Brinkmann →
Previous Post: « NoClick for Firefox activates text input fields automatically
Next Post: Priv8 adds sandboxed tabs to Firefox »