Most users who buy, build or get a new PC want to move data from the old one to the new. This includes personal files such as photos, videos or music but also applications, application data and customizations.

While it is possible to transfer plain files easily to the new PC, for instance directly over a network connection or by using storage media such as external hard drives or DVDs to do so, it is not as easy to move applications to a new PC.

Well, there is one exception to that and that is if the programs are portable since they can be transferred just like regular files then.

Software like EaseUS' Todo PCTrans Free comes to the rescue if installed software needs to be moved to a new PC.

Previous version of the application required that you connected both PCs to the same computer network to transfer files. The limitation to direct transfers was a problem for some users, for instance when the devices were not in the same location or if for whatever reason they could not connect to the same network.

This changes with today's release of EaseUS Todo PCTrans 8.0. The new version introduces indirect transfers which means that you can burn data to an image on the source computer and load it from that image again on the target computer.

A screen is displayed to you on first start where you can make that choice. You cans till select to transfer data on a local network directly if both PCs are connected to it but if that is not the case, have the option to create an image file instead to use it for that purpose. 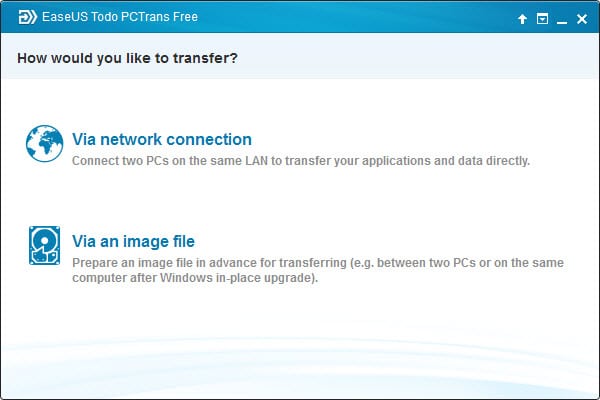 The program displays a second prompt if you select the image file option. Since it does not know if you are running it on the source or target computer, you need to make that choice on the next page.

If you select the option to create an image file, the usual options to copy user data and applications are presented to you. The free version is limited to two programs still which may not be enough in most cases.

As far as I can tell, the user data transfer is not limited in the same fashion.

You do need to get the image file to the target PC. Depending on its size you may be able to burn it to disc or copy it to an external drive or USB device in order to do so.

The transfer of applications includes all data that is required to run it on the target system. It worked really well during tests and while it is likely that it won't work for some programs, I did not run into any that would not work on the destination PC after the transfer completed successfully.

The option to create a data image instead of allowing only direct transfers of data improves EaseUS Todo PCTrans significantly.

The free version is quite limited however in terms of apps that you can copy over to the new PC. Two is a low number and usually not sufficient in most cases.