Live tiles are a new feature of Windows 8's start screen which can display static or dynamic information. A plain live tile may just show the logo or name of an application and link to it while a more advanced tile may display changing information as well.

The information displayed here may list the last notifications on a social networking site, the last emails you have received, up to date stock exchange information, or the latest photos uploaded to your account.

Interactive live tiles improve that further and the core difference between them and live tiles is that they can modify the layout of the tile and the information displayed on it.

A basic example is the mail live tile. When you activate its interactive live tile functionality, it is automatically expanded into a larger element next to the original tile. 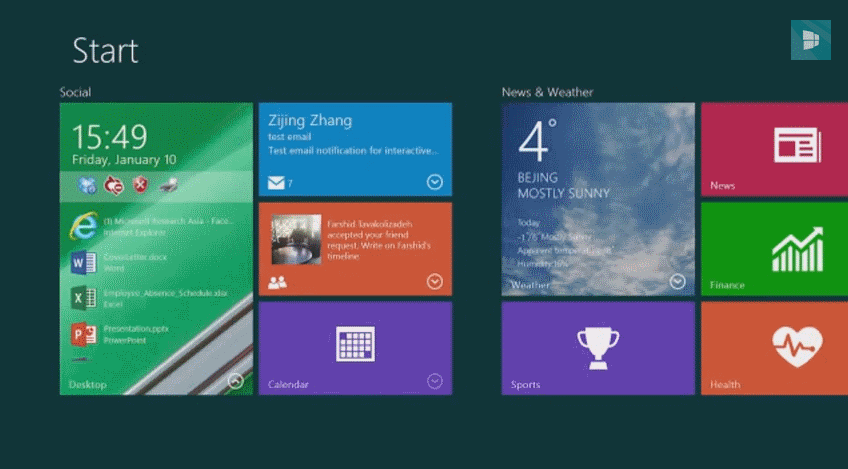 Here you find listed all recent emails that you have received with options to scroll them and tap or click on them to load them directly from the tile.

The desktop tile has received similar improvements. It can now show all running applications and programs on the desktop, so that you can switch to them right away. Previously, you had to go to the desktop first and click on one of the running programs on the taskbar to do so.

Similar improvements are built into the news and weather app. You can expand the view of the tile to display the weekly weather forecast right on the screen, or check out a particular day on the start screen directly.

This works extremely well for the music app, which displays a play option and access to songs directly on the start screen now.

This allows you to play music without leaving the start screen interface to load the music app first. Other applications shown in the demo video include camera to take pictures directly from the start screen, the calculator that appears directly on it, the health tracker and fitness application, or the news application.

Another new feature is that apps that are displayed in a sidebar on the desktop can now interact with desktop full screen apps. Microsoft calls this parallel tasking. It allows interaction between different apps running on the screen, for instance between the file browser app and email app to attach files to emails.

Here are the full demo videos

It needs to be noted that the demo has been published by Microsoft Research. While it is likely that Microsoft will integrate the new features into the Windows operating system at one point in time, it is not clear when this is going to happen.

It is not really something that desktop users will benefit from unless they happen to use the start screen interface as well. Users on tablets or touch-enabled devices or screens may benefit from this however as it can improve certain workflows significantly.