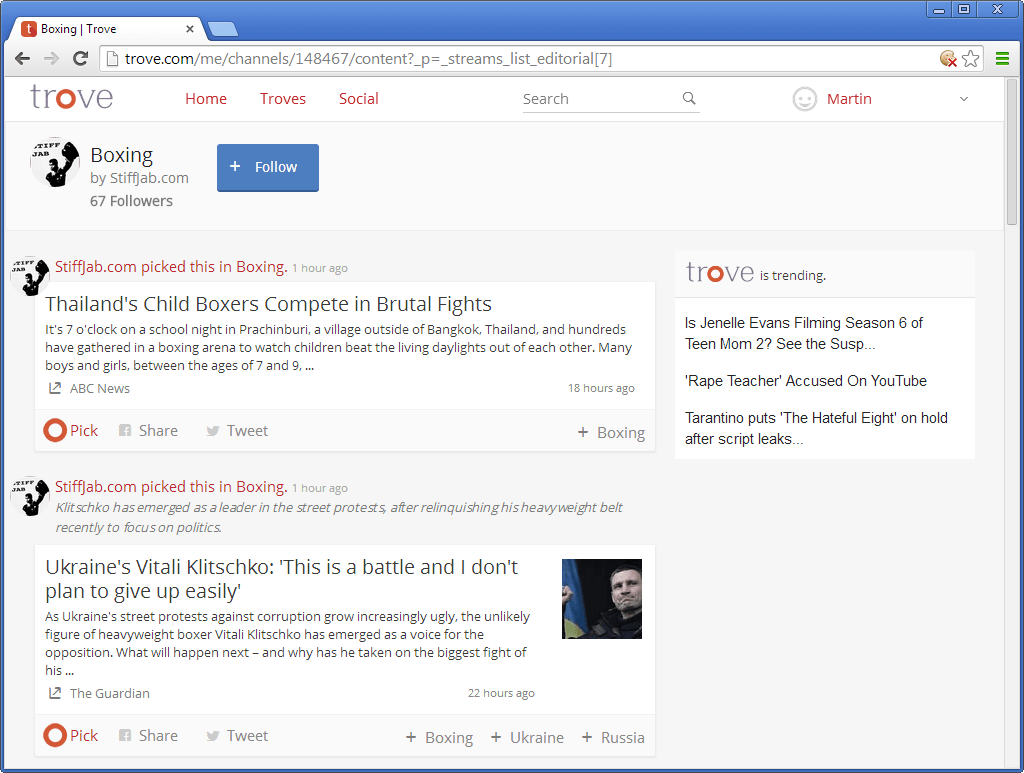 When it comes to news, one of the big issues that many users face is noise. There are so many news articles, reports, videos and images out there that it has become difficult to filter interesting ones from those that are of no interest to you.

It may work well on a site that is focused on a specific topic, but once more than one topic is covered, you may have to ignore some articles to read only the ones that you are interested in.

The thing that comes closest to a pure news stream of articles of interest is RSS in my opinion. If you like our articles on Firefox for example, you can just subscribe to those, and ignore the rest of the site. And if a site does not offer those options, good news readers do.

As far as news aggregators go, Reddit is following a similar concept with its groups concept. Some groups there may be too broad though, technology for instance, but that is where hundreds of other technology-related groups come into play.

Trove is a new project -- or better rebuild project -- that aims to change news overload in a different way. It is a news aggregation service on first glance.

The name "trove" refers to a collection of articles covering a subject. There is the Mozilla Firefox trove, covering Firefox news, a politics trove, or one about boxing.

All these troves, at least in the very beginning, are nothing more than filtered news articles from around the world. What makes trove different to many other sites is that people can curate troves. If you are an expert on Firefox -- or not --, you can curate a Mozilla Firefox trove so that only stories that you add to it appear on it.

The main idea here is that curated troves are maintained by people who love the subject, or are at least interested in it, so that the articles are relevant and interesting to other users who are interested in the same subject.

While this may be the case at times, it does not necessarily have to be the case. First of all, since anyone can create troves -- provided that they use the iOS app right now, as it is the only way to do so -- it does not necessarily mean that they have to be experts on a topic, or interested in it at all. While this may be sorted out by social means, it can also lead to issue number two.

A second concern that I have is that people abuse the power of being a curator. If you look at the introducing blog post over at the Trove website, you notice that some troves mentioned explicitly on the page are maintained by companies, organizations or people who operate in the field.

That does not necessarily mean that you will find bias here, or hidden advertisement for company products, but that is something that needs to be monitored.

The third concern that I have is that the unmoderated troves are just like news listing on news sites. The Firefox trove for instance listed ten articles, of which half covered Firefox OS, a The Next Web article about Internet Explorer that mentions Firefox only in the "read also" part of the article, and just one or two articles that I consider a good fit here.

Last but not least, it saddens my heart that Ghacks is not one of the sources that the site uses. Trove is only supporting the "usual" suspects and nothing else, something which I do consider mainstream news.

So, is Trove a news service that I will be using from now on? No, it is not. Its concentration on mainstream news sources is problematic, there are virtually no information about curators other than their name, and the lack of an Android version are all issues that need to be sorted out before I'd give it another shot.

For now, it may work well for you if you are interested in mainstream news. If you are not, then this is not for you.