If you browse the (desktop) control panel on a Windows 8.1 system you may notice a new entry there that you may not have seen before. Work Folders is listed there only if you switch from the default basic view to list view that is displaying all control panel items at once.

When you click on the feature, you find out that it can be used to make work files available "on all devices you use, even when offline", but that is about it. Not that helpful. A blog post by Nir Ben-Zevi back in July about the feature in Windows Server 2012 R2 sheds some light:

Work Folders enables IT administrators to provide Information Workers the ability to sync their work data on all their devices wherever they are while remaining in compliance with company policies. This is done by syncing user data from devices to on-premise file servers, which are now extended to include a new sync protocol. 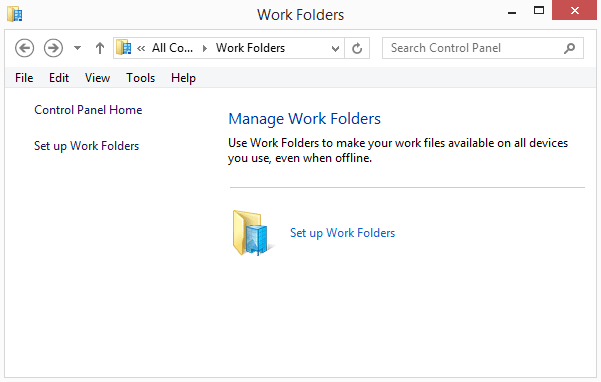 The core idea behind work folders is to support the "bring your own device" work scenario, by enabling employees to bring their own devices to work. Work folders are used to store and access work files on those devices and all other computer systems the user has access to.

The benefit for users is that the data is stored directly on their devices so that they can access it from anywhere. Employees can work on documents on company computers or on personal devices, and have the documents synced automatically between the devices.

To set up Work Folders, simply click on the link in the control panel to do so.  You are then asked to either enter your work email address, or enter a work folders url instead.

This works very similar to how SkyDrive or any other file synchronization service works. The core difference here is that the data is not stored on a third party server, but on a company server so that organizations have full control over the data at all times.

Other benefits include the option to encrypt data with self-generated certificates, and that all work folder files are synced in full and do not appear as placeholder files on the user's computer system.

Work Folders are built-in to Windows 8.1 and Windows Server 2012 R2 exclusively. Microsoft does have plans to bring the technology to other Windows operating systems and even other platforms such as Apple's iPad.

You can read up on other requirements over at Microsoft Technet.

In short, it requires:

Additional requirements for syncing data over the Internet:

The feature appears limited in its current state. There is no collaboration built-in for now for example

Work Folders could become a killer feature of Windows 8.1, considering that it addresses a core issue that organizations face these days: how to make data available without sacrificing privacy or sharing the data with third parties in the process.

While it is certainly limited right now, a free self-hosted file synchronization solution will certainly be appreciated by many.

Previous Post: « How to install the Media Center Pack in Windows 8.1
Next Post: Why Windows 8's App Store is not popular »