Manga are highly popular on the Internet and it comes at no surprise that app stores are sporting a solid number of manga and anime apps as well.

Manga Rock is a fairly new application for Android that brings a lot to the table. It taps right into the databases of 15 different manga sources that support seven different languages.

When you first run the application after you have installed it on your device, you are asked to pick the sources that you want to use. They are sorted into language groups with the English group being selected by default.  Here you find the popular websites MangaReader, MangaFox, MangaEden and MangaHere listed. If you browse down, you find sources for other languages such as Italian, German, Spanish, Chinese, French and Vietnamese.

The application displays the manga that the first selected source makes available afterwards. You can scroll down the list with a flicking motion, or use the fast scroll options displayed on the right side to quickly jump to a specific position in the list.

Since the lists are rather large, you may use the search instead to find manga that you are interested in. Here you can also open the category selector and switch to one of the other sources that you have selected at the beginning. 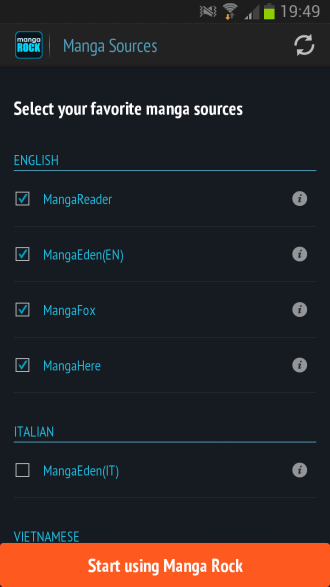 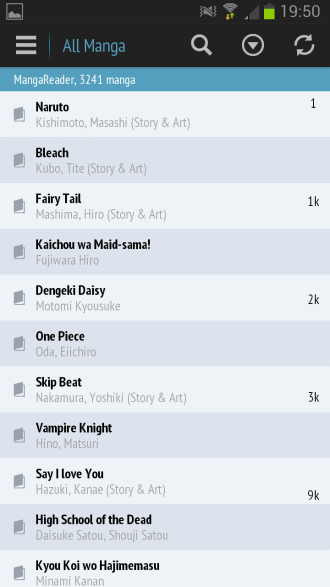 The filter menu at the top of the screen enables you to select categories like action, fantasy or drama to that only manga filed into the selected categories are displayed in the listing. Here you can also change the default sorting order to name instead of rank, and select to display only complete or on going manga series.

The switching to another source takes a couple of seconds as the list needs to be loaded first before it is displayed on the screen.

A tap on a manga opens its summary page that displays a cover, the categories it has been filed in, information about it that include its author and the published chapters, and a description of the series.

You can switch to chapters on the screen to start reading any of the available chapters right on the phone. An online connection is required for that to happen. It is alternatively possible to download one, some or all chapters to the device so that the chapters become available offline as well.

Downloads are added to the download queue which you can access to monitor the download progress, and also to remove items from the queue again. The storage size of your device is not checked, so that you may run out of space depending on how many manga you have selected to download.

Chapters that you have added to the queue are removed from the download selection list so that you will never download a chapter more than once. 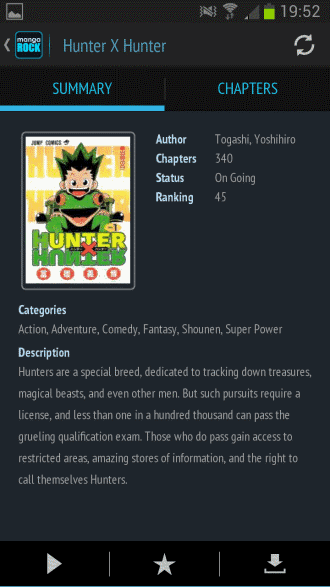 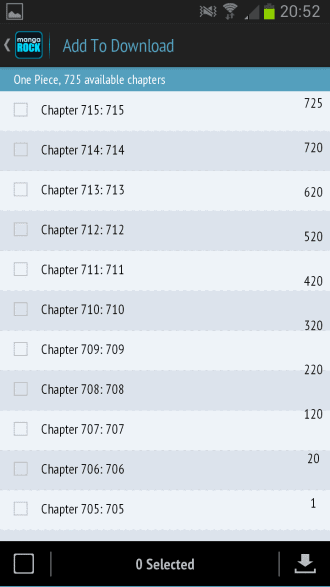 The application remembers what you have read already and displays those chapters in a different color so that you can continue reading where you stopped the last time. The reader has been designed in a way that it offers direct access to all chapters one after the other. Once you reach the end of a chapter, the first page of the next is loaded so that you can continue reading.

The reader displays advertisement at the bottom of the screen and also while chapters load.  You can purchase the pro version for $3.99 which removes all the ads.

Manga can be added to your favorites so that you can keep track of them easily. Another interesting feature is the recent listing which highlights manga that you have read recently. You can use it to jump straight back to the chapter that you have started to read last.

Please note that Manga Rock is only available for Android version 4.0.3 and above, and not for older versions of the mobile operating system.

Manga Rock leaves little to be desired in terms of availability and functionality. If there is one thing missing, it is the ability to select another storage destination for the downloads. If you like manga, then this is an application that will definitely please you in this regard.

Update: Manga Rock is no longer available, it has been removed from Google Play. You can try a different application such as Manga Reader instead which offers a similar feature set.

Previous Post: « Can Memrise help you learn the basics of a language?
Next Post: Add multiple widgets in the place of one on your Android home screen »