I have previously written about RSS reader FeedSpot, which is in the running to be your replacement in the wake of the Google Reader death. Previously the web app has been working in a private beta, but today the service rolls out to the general public with updates to a number of the options included.

Developer Anuj Agarwal tells me "we've launched Feedspot in public beta today. I would like to invite you to have a look at the all new RSS Reader".

The appeal to this latest build is the social features included in FeedSpot. The brand new public beta includes a list of these social options that attempts to separate it from the countless competitors like Feedly, CommaFeed and the latest AOL and Digg versions.

FeedSpot is free for all basic features, but paid users get access to pro features like "Search within your Feeds" and advanced sharing to Evernote, Bufferapp, pocket, and more. 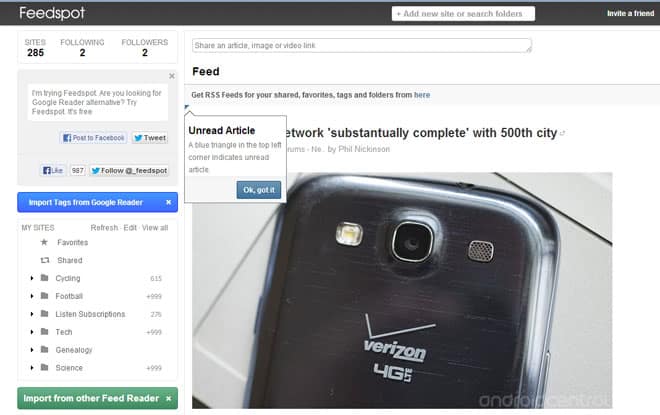 Just over two months ago I made the move to Feedly, as I knew Google Reader was nearing death's door. I have been largely dissatisfied, but have persevered. I wanted to make the switch to CommaFeed, but while the look was promising, the performance was slow and in the end I returned to Feedly.

I used FeedSpot off and on during private beta, but with the updates and the app being made public, it may be time now to move along to this.

No RSS reader is perfect, and all have their quirks and perks, but FeedSpot seems to offer similar features to Google Reader, while adding a bit of shine to the overall performance and feature set.

Previous Post: « A first look at Aol Reader
Next Post: Digg Reader Beta is not yet ready for prime time »