Dropbox has just released the first version of the service's official app for Windows 8. The application, compatible with all versions of Windows 8 including Windows RT, is already listed in Windows Store and can be installed to the local system from there. The app is the only option for RT users to access the contents of their Dropbox storage on the desktop, while regular users can install and use the Dropbox client instead. This makes it likely that the majority of downloads and installations will be on Windows RT systems and not on Windows 8 systems.

First thing you need to do after installation is to enter your Dropbox login credentials and if you have configured it, the security code to verify that you are the owner of the account. If you have not done so already, check out this guide on how to enable two-step verification on Dropbox to protect your account from unauthorized access. Once done, your account is not only protected by your username and password, but also by a code that Dropbox sends to your mobile phone when someone tries to log in from an unknown device.

The Dropbox app for Windows 8 displays all folders and files on the screen after you have signed in. The folder and file listing is just that, the actual contents of the files are not transferred automatically to the device. This works similar to Dropbox on Android where syncing is also disabled by default. 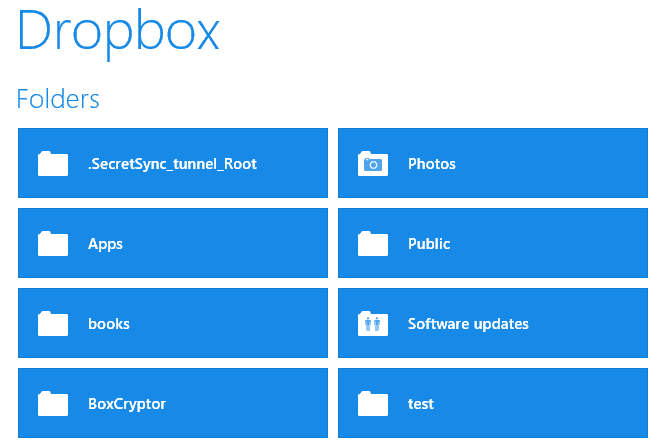 You can open any file with a left click provided that Windows "knows" how to open the file type. I could not open .htm files for example and had to change the default file handler first before that option became available. You can't download files using the Dropbox app right now, the only available option is to launch it in the default program. This limits the usability of the app significantly, one would expect at least an option to download files instead of opening them directly. There is also no option to move files or folders around, create folders or delete files.

The Dropbox app comes without any options or settings other than enabling or disabling notifications. It is likely that Dropbox will add those features in future releases of the program. For now, it is barely usable and I'd suggest you use the website instead if you want to access contents on Dropbox or, if available, the desktop client.

Previous Post: « Flickr's holiday gift - 3 months of unlimited storage
Next Post: How to read all Quora.com answers without signing in »