ChrisTV Online is one more app for cord-cutters

These days everyone seems to be talking about "cutting the cord", but while we all want to do it, it is more difficult than you think. That is why we talk about it, but few of us actually do it. Thankfully, it is becoming increasingly easier with more and more services becoming available to ease the transition.

Netflix offers affordable streaming of movies and TV shows, as does Amazon Prime and Instant, Hulu, PlayOn and Crackle (which is free). Redbox Instant is out in private beta and expected to be released in early 2013. There are also a plethora of other, less well-known apps out there, like ChrisTV Online.

This one is pretty interesting for several reasons. It not only provides U.S. channels, bit others from around the world and even lets users choose by location and language. The download is less than 6 MB.

The app installation is simple, but it does require you to fill out a brief survey. You will need several things to help you run the app -- Windows Media Player, Flash for Internet Explorer, the Veetle TV plugin, Sopcast filter and VLC. All of those may not be necessary, but not having them will limit your channel options. 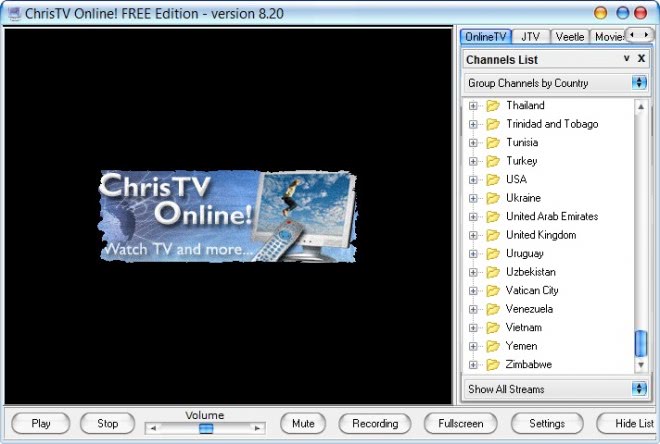 Once you open the app, you will find a channel list in a column down the right side of the screen. By default, the app groups channels by country, but there is a dropdown box on the list that allows you to choose from other groupings like language or channel type. You can also view by movies or TV shows.

While the free app provides quite a variety of video that will keep you occupied, there are some catches. The free version does not include US channels and many features have to be enabled with the paid version. That will provide, not only the US, but also many premium channels, as well as unlimited recording and no reminders to upgrade. The premium version retails for 25.00 US or 30.00 Euro.

Martin's take on the program

I thought I give ChrisTV Online Free Edition a try as well to see if I can add anything to the review. First thing that I noticed is that you need to monitor the installation dialog carefully as you will end up with third party offers installed on your system otherwise. The program tried to install Relevant Knowledge and Complitly during installation. If you do not want those, make sure you disable them.

The program itself displays the channel list on the right which you can see on the screenshot above. Channels are grouped by country by default, which you can change to language, category and a couple of other sorting options instead.

Icons highlight the channel type for each channel in the list. Channels with a white f on a red background for instance are all premium channels that you can't play using the free version. You also can't hide the premium channels in the list to avoid clicking on them.

A computer monitor indicates an official TV channel that is streaming contents, a web cam contents that are supplied by web cams, and a speaker radio channels.

I did receive "the channel is not available at the moment" messages quite often while browsing through the channel selection and would say that more than 50% of channels that I tried to play did not work.