I have been experiencing crashes and blue screens since yesterday on my Windows 7 operating system. I first thought Firefox was the program to blame for that because it was always running when the system crashed, and the system never crashed when the browser was not running. The whole system locks up completely when this is happening and displays a blue screen after a while. I checked the error code and while I could not find the same on the web anywhere, it appears to be caused by hardware issues and not software.

I'm also quite sure that I saw my primary hard drive disappear from the system shortly before the system would freeze completely. A hard drive failure would be bad, and after making sure that data was backed up properly, I started to look into the matter. First thing I did was a disc scan to make sure the drive did not have bad sectors that would cause this. Turns out, it did not.

After playing around for a while I decided to bring in the heavy guns, in the form of HDDScan, a free program that you can use to scan your hard drives thoroughly. 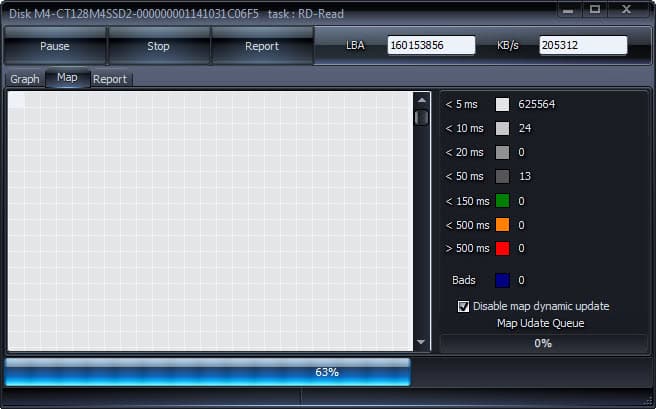 The program can take your hard drive for a test drive, but that is not all it can do. It displays a selection menu on start where you can select a connected drive and either SMART or a test with a click on the test options. The SMART button displays the parameters in a new window which you can use to check if there is a reported value that dropped below a recommended value.

The test button displays a couple of options of which the Surface Tests option is probably the most interesting one. Here you can run read, write and verify tests on the selected hard drive. You can either test all sectors or make a selection here.

Once tests run double-click on the test to see the interface you see on the screenshot above. The program displays the response time of each block and the bad blocks. If you get bad response times or bad sectors you know something's not right, and while you may want to try and resolve those issues, it may be time for a new hard drive in the near future. You can stop and pause tests at any time, and since only one runs at a time, all other tests that you may select to run on a drive are added to the queue.

The program makes available a couple of other options, like running SMART offline tests, checking a drive's temperature or displaying the list of supported features.

You are probably wondering about requirements and capabilities. Here is a short run down of that:

It is a great portable program that you can use to test your hard drives in detail. My drive by the way responded just fine to the test, but only after I switched out SATA cables. While it may be too early to tell if a faulty cable was responsible for the crashes, it really looks as if this is the case at the moment.