Twitter is one of the largest services on the Internet, used by millions of users every day to publish messages about their personal life, events, commentary and virtually everything else that you can think off - or not. While you are probably not interested in the bowel movement of some random chap from a country far away, you may be interested in messages that relate to some of your searches on the Internet.

It is not surprising that researchers and marketing companies process Twitter data for predictions like how people in a certain state or country will likely vote, how diseases spread across the world, or how pleased buyers are with new items that they have purchased.

Google for that very reason did integrate Twitter results on Google Search, but had to remove them last year as the company could not come to an agreement with Twitter to continue offering the service on Google Search. 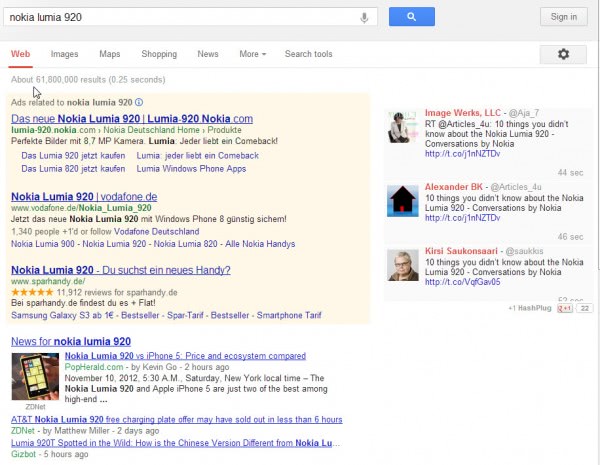 Hashplug is an extension for Google Chrome that adds Twitter search results to the Google search result's page again. Once you have installed the extension you will notice that Twitter results are automatically appended to the right sidebar of the page.

You may also notice that the embedded Twitter results are moving down other contents that may be displayed on the sidebar like Google's Knowledge Graph which offers related information about the search query.

The browser extension displays the profile photo, handle and name of the Twitter account the posting was made from, as well as the full message that was published on Twitter. The results update automatically whenever new posts appear on Twitter. You can furthermore scroll down the results to access more than just the three that are displayed by default on the search results page.

I have tested the extension on google.com and several localized versions of the search engine, and Twitter results were displayed on all of them. Note that you can't filter Twitter messages by language, which means that you may end up with messages in languages that you do not speak.

Best Pinterest Plugin for Chrome? Here is my best choice