Display your Android apps on Google Play one page

When you open the My Android Apps page on Google Play you see all the apps and games that you have installed on your Android device, and the total number of apps in your library. Besides listing all the applications and games that you have installed or had installed previously, it gives you a set of management features that may come in handy. Probably the most important feature is the ability to uninstall apps that are currently installed on your Android device, and to install apps and games that are listed in your app library. While you can do that from your phone, tablet or computer running Android as well, it is usually a lot easier to do that right from the apps listing page on Google Play.

What you may also notice is that apps are divided on multiple pages. If you are running a monitor with a large resolution, you may prefer to get a list of all apps on a single page. This may even be handy on small screens as you do not have to switch between pages to scroll through all of your apps and games that you have installed or stored in your library. 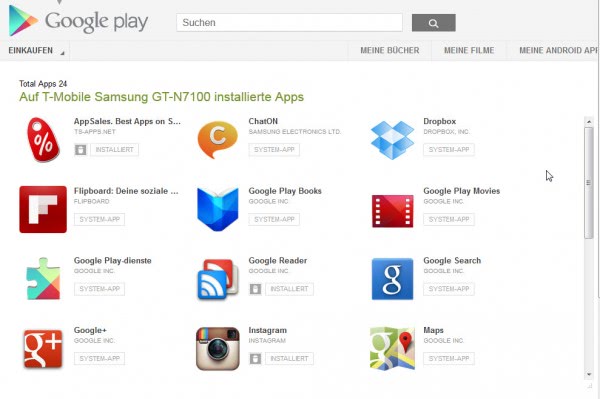 The userscript Google Play Android Store Library Tweaker improves that by making available all installed apps and all library apps on a single page on Google Play. You will notice that it adds a scrollbar to the front page of the apps listing that you can use to scroll through the apps there. At the bottom of the scrollbar is a resize icon that you can use to increase or decrease the visible app listing so that you do not need to scroll that much, or at all, if you increase it.

The userscript furthermore adds free apps and paid apps toggle buttons to the apps library so that you can display only free or paid apps there.

Firefox users can install the userscript right away provided that they have Greasemonkey or Scriptish installed. Google Chrome users need the Tampermonkey extension for their browser to make the script functional in their web browser. Google Play Android Store Library Tweaker just like yesterday's High-Res Play Store Screenshots makes a small modification to the store that improves usability significantly for users of the store.