If you sometimes share files on Facebook, for instance in a group or your news stream, you are likely using a file hosting service to host the file, especially if you do not have access to your own server that is permanently connected to the Internet. To shareÂ  a file, you can simply paste in the public url of it so that anyone can access it with a click on the link.

Dropbox just announced that sharing files from Dropbox on Facebook has just become a little bit easier. You can now selct Dropbox files directly on Facebook instead of having to post the file link manually on Facebook after you have made it publicly available.

The new feature has been enabled for Groups, and is being rolled out as we speak. You need to connect your Dropbox account to Facebook first before it becomes available. Once it does, you simply select Choose file on the groups page where you are then presented with an option to select a file from your Dropbox. 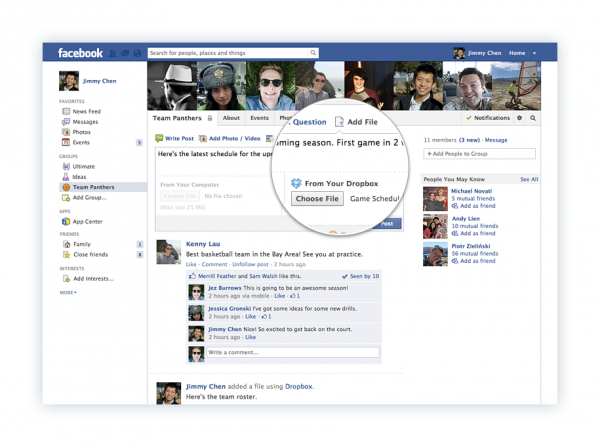 To use the new feature do the following:

Facebook users who often share files in groups on the site may find the feature helpful to optimize their workflow. Users who do not want or like it can simply ignore it. The file links work even if you do not have a Dropbox account or do not want to link your account to Facebook. (via Dropbox Blog)