Adding social features to an existing product is always something that developers need to be very careful about as it can irritate part of the product's user base. Firefox in the past two years has seen lots of changes and feature additions of which not all were welcome by (part of) the community. Think about Panorama, the Firefox button, the removal of the status bar or other smaller or larger changes that Mozilla made in the past. And things are not standing still when you look what lies ahead either. The new download panel that replaces the download window, in-content preferences, or the full release of Firefox's new design are just some of the new features that will make it into one of the next versions of the browser.

According to SÃ¶ren Hentzschel, social features can be added to that list. Mozilla noticed that the majority of Internet users are spending time on social networking sites like Facebook or Twitter, and the idea was born to provide Firefox users with a browser that provides them with better accessibility and connectivity when it comes to these networks.

The feature works similar to the browser's search provider feature. Users can install or activate social networking providers in the browser to interact with the service through toolbar icons and the sidebar, and without having to access the site of the service directly.

A mock up has been posted on Bugzilla that is highlighting how this could actually look like in the browser. According to that mock up, Firefox will display up to three social network favicons in its toolbar that act as notifiers and means to quickly interact with the service. 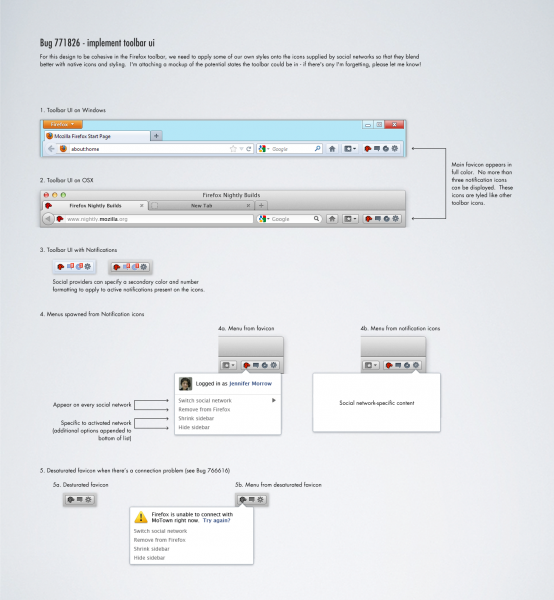 A second mock up demonstrates how a sidebar could look like in Firefox. Here you see chat contacts and their availability on the right, a chat and search at the bottom, and options to react to friend activities right from within the sidebar. 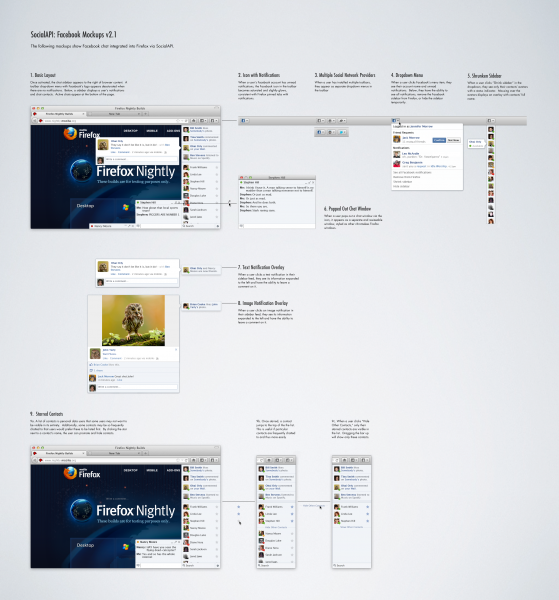 The feature seems to be completely optional, as users need to sign in and/or connect their social networking accounts before it can be used in the web browser.

I for one can't really see myself using the social buttons for a number of reasons. It does feel a bit redundant considering that add-ons are available for major social networking sites that integrate part of the functionality in the browser. And having to keep open a another tab with the chat or notification interface is not really an issue either.

Still, there are certainly Firefox users out there who will like the new feature and use its to its fullest. As long as it is opt-in, I do not really have a problem with it.

What's your take on the integration? Good thing, bad thing, or do not care?