The developers of LibreOffice have just released version 3.6 of the Office program. It is a lesser known alternative to Microsoft Office and OpenOffice that is available as a web download or as a torrent. LibreOffice 3.6 is a major release that introduces a number of feature updates and new features to the suite as a whole or individual programs.

Most notably - probably - are the performance improvements in the new version that you will notice when importing Word, Excel and PowerPoint documents, working with pivot tables in Calc (The Excel-like application) and when you scroll and layout large documents. 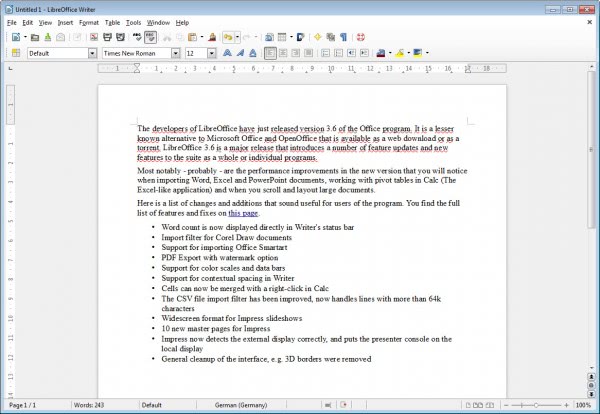 Here is a list of changes and additions that sound useful for users of the program. You find the full list of features and fixes on this page.

Since we are right at it: which Office program or programs are you using, and why? Are you using Microsoft Office, LibreOffice, OpenOffice, or maybe even another Office suite other than the three major ones?

Previous Post: « How to encrypt partitions with DiskCryptor
Next Post: « Picturethrill, auto-download and set wallpapers from Bing, Nasa and other sources