A few days ago I mentioned that Google was about to release the first Metro version of the Chrome browser. As you all know, Windows 8 will ship with two user interaces, the desktop interface that you are all familiar with, and the new Metro interface that is limited in terms of functionality when compared to the desktop. Software developers are now in a position where they need to create special Metro-versions of their applications to support that part of the operating system as well. And while they simply could plant an icon there that launches the desktop version, some believe that it is better to create special Metro versions instead.

Microsoft is for instance providing a copy of Internet Explorer 10 for Metro that is limited in functionality. It for instance does not support plugins, and seems to have been optimized for touch-based devices. Mozilla too has been working on a Metro version of Firefox for some time now and seems to have made great progress so far.

And now it is Google with the company's Chrome browser. The latest Chrome Dev release is now featuring the first public implementation of the Metro-version of the browser. Windows 8 users who have Chrome Dev installed on the system will notice that the browser is now opening up in Metro when executed there. 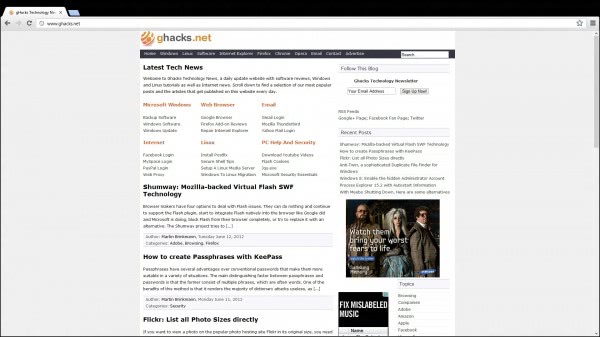 The browser itself does not look that different from its desktop counterpart, at least not when you first start it.Â  What you will notice though is that there are no window controls to maximize, minimize or change the size of the window in the Metro version. You can however use Metro's feature to drag the Chrome browser to the left or right sidebar of the screen to display another application besides it. The menus seem to be larger and optimized for touch-input.

Themes, extensions and all that good stuff work in Chrome for Metro. What you will notice however is that the Metro version and desktop version of the browser do not share contents or information right now. When you install a theme or extension in Metro, it won't be available on the desktop and vice versa. The same is true when you sign-in to Chrome, as you need to sign-in in both versions of the browser if you want to use the functionality in both. You can however make use of the browser's synchronization feature to sync data between the desktop and Metro version.

When you look at the Chrome user directory on Windows 8, you will notice that Metro has its own directory in the root folder. Basically, the two applications are completely independent from each other at this point of development.

Interested users who want to check out the Metro version of Chrome need to install the dev version of the browser on their Windows 8 system.