The Windows Store is one of the major changes coming to the Windows 8 operating system. It is basically an app store comparable to Apple's or Google's application stores. Windows 8 users can access the store directly from within the operating system to download and install free and commercial apps. And apps in this regard meant apps for the Metro user interface, leaving desktop applications and developers standing in the rain.

A recent blog post at the Windows Store for developers blog however sheds some light on an upcoming change that will go live today. If you have already installed the Windows 8 Release Preview, you will notice from today on that desktop apps are listed in the store next to Metro apps. 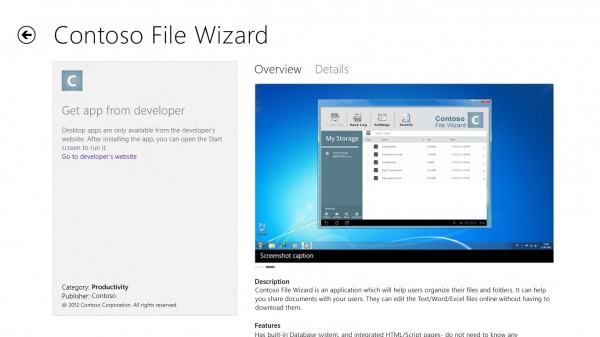 While listed in the store, desktop apps do not link directly to the download and installation of the selected program. As you can see from the screenshot above, they are merely links pointing to the developer website from where the software needs to be downloaded and installed manually.

Microsoft explicitly notes that the "servicing of desktop apps remains between the developer and the customer and is not handled via the Store".

The listing of desktop programs is definitely a great addition to the store, even though the downloading and installation of apps is not as automated as with Metro apps offered in the store. Desktop app developers who manage to get their apps listed in the Windows store will definitely benefit from the exposure. Microsoft on the other hand benefits from increased app listings in the store, and maybe even a core system that will eventually lead to a full software store carrying both Metro apps and desktop apps natively.

You can read more about the store changes in the Release Preview here.

Previous Post: « How to find out when your version of Windows expires
Next Post: « Back Up PC Files With BitReplica