What would make me touch a Mac - gHacks Tech News
ghacks.net

What would make me touch a Mac

2012 or early 2013 will be the time I finally take the plunge and buy an Apple iMac.  This might surprise those of you who know me as, being a Windows MVP (Microsoft Most Valuable Professional) awardee and a Windows author I'm certainly not the typical Apple, Mac or OS X type.  I don't even currently own any Apple products, I never have.  So why am I now pretty determined to buy a Mac and what is it that's standing in my way?

The main reason for buying a iMac is aesthetics.  While some PC all-in-ones are certainly pretty and unobtrusive, they don't hold a candle to what Sir Jonathan Ive, the recently knighted British lead designer at Apple has achieved in the last decade or so.  Nobody is going to complain about Apple's product design or the quality of those products, and they are as desirable as they have ever been.

There are problems associated with this however, and some people do see them as insurmountable.  The main one is the price premium you have to pay for any Apple product.  Not only are the computers far more expensive than their counterpart PCs to begin with, but once you start configuring them on the Apple website the price really begins to rocket.  For example on the Apple UK website (which will forever be apple.com/uk and not Apple.co.uk after the company had an argument with the Beatles, seriously yes the 60's band!) an upgrade from 4Gb of 1,333MHz DDR3 RAM to 8Gb costs a whopping £160.  Conversely a full 8Gb of the equivalent Corsair memory can be bought online for just £37, making the Apple markup quite substantial.

When you buy an all-in-one computer though, be it from Apple or any other manufacturer they are not intended to be upgraded by the user, and Apple's machines can be considered even less upgradable given the way they're assembled and the attention to detail that goes into them.  This all will make the specification of the iMac I would like to buy a staggering £2,500 which is double the price I'd expect to pay for an equivalent PC. 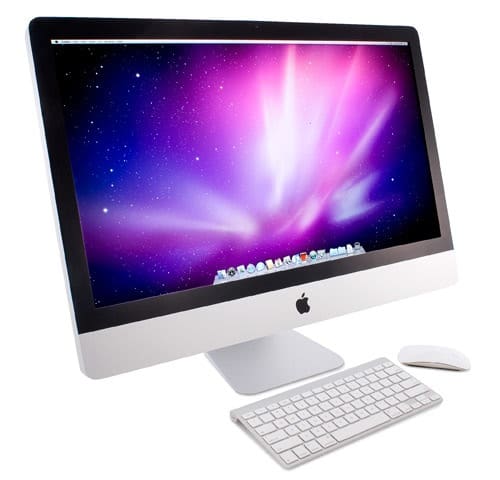 So why would I bother you would think, other than to say that I own a Mac?  Well being a Windows author it would be extremely useful for me to have a Mac for work both so that I can regularly use Windows in Boot Camp, but also so that, as my mother keeps telling me, I don't get blinkered by Microsoft Windows.  I could just then buy a Mac Mini and plug it into my existing set-up of monitor and keyboard, but that's just over-complicating things when the whole point of the exercise is to buy a new all-in-one that will look great in my home.

The price, you might be surprised to hear, isn't a barrier.  It isn't for me and it's not a barrier either for the millions of people worldwide who go out and buy a Mac every year.  So what is the barrier and how would I get over it?

The barrier is simple and singular.  Touch.  Apple are an odd company when it comes to supporting new technologies.  They like to do things their own way and in their own time.  There's still no BluRay drives in their products and they refused to include USB3, despite its obvious advantages and the cheapness of the components, instead going for Thunderbolt, but a copper-based variety and not the original fibre-optic version (originally called Light Peak) that Intel had first planned.  This latter decision, while also made with Intel, mostly concerned price but price doesn't seem to be a subject that Apple executives tend to spend much time debating in meetings surely!?

Touch-screen technology is certainly the way forward however and it's now an important enough technology for me to be able to say that all of my new computers going forward will have to include support for it.  Currently there are no Apple iMacs or Apple monitors that support it and while it may be built into the next version of OS X, Apple are certainly keeping it quiet if it is.  If you want to use touch on a Mac you're currently limited to the magic trackpad, which I've used and personally find frustrating.

So is this a deal breaker?  Well I began this article by saying that "2012 or early 2013 will be the time I finally take the plunge and buy an Apple iMac."  I mean it too, I will.  It won't be a wholesale move away from PCs for me as I'll still need a PC for work but neither does it mean that I'll use Windows exclusively on the Mac.  It's a very interesting time in the computer market at the moment, and there have been so many interesting and, indeed, fascinating technologies coming into the arena including touch, Kinect, Thunderbolt, USB3 and sensors.  I just wish that Apple would start supporting more of them!