The Last Week Without Windows 8, What is the Tech World Doing? - gHacks Tech News
ghacks.net

The Last Week Without Windows 8, What is the Tech World Doing?

Unless you hadn't noticed, Microsoft are gearing up for the release of the Windows 8 (beta) Consumer Preview publicly in just over a week, but others, such as official beta testers and MSDN (Microsoft Developer Network) subscribers will no doubt get it a week before as happened with Windows 7.  We're now in the last week then with no news.  So far though the old adage that "no news is good news" hasn't gone so well for Microsoft, and Windows 8 has received some very bad press as IT Pros and businesses express their concerns about Metro, and the relegation of the traditional Windows desktop to almost a side-feature.

Also this week Apple have unveiled the next version of OS X (they're dropped the Mac bit) called "Mountain Lion".  It was widely expected that the company would build more tablet-like features into the operating system, expanding on the iOS-style Launcher that was introduced with the previous version.  Almost as if in response to the negative publicity Windows 8 has received they've decided not to press ahead with further tablet-friendly features for now, assuming that any such features were even planned, and focus on the desktop instead.

They have added some features that challenge Windows 8 however including some new social networking and cloud integration, and a notifications panel.  Mountain Lion will be released, out of Apple's normal cycle for OS X, this summer to challenge Windows 8 on the desktop and to try to convince disgruntled IT Pros that Apple is a friend to the desktop user.

Elsewhere on the Internet you'll have noticed that general tech news on the blogs has been somewhat slow this week, this is because a lot of people will have taken the week off anticipating a mad few weeks from next Wednesday.  For those of us writing Windows 8 books then the process will begin in earnest from the middle of next week, and I have just finished clearing out, tidying and sorting my home office to get everything ready. 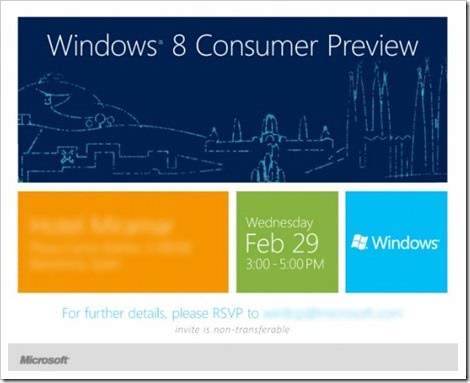 You'll find that authors will probably have been clearing the decks in recent weeks, as I know I have, making sure that all the other work that will need to be done in the next few months, until June in my case, has been finished and put to bed way ahead of time.  It is going to be extremely busy from here'on in and personally I have not just one, but two Windows 8 books to complete by the end of May, one of which has to be written in a format called ASCIIDOC, which is equivalent to writing a whole book in XML  :/

As for everyone else, well you'll know what you have been doing, but the crescendo of excitement surrounding the release of the Consumer Preview in the last few weeks seems to have fall very quiet in recent days.  People are now sitting and waiting for February 29th to come around.

How many people will download the public release of the Windows 8 Consumer Preview remains to be seen, but Microsoft will need many millions of people to do so in order to claim a success.  This figure would need to be at least 9 million or well into double-figures in the next month or two for the company to claim victory and that people are genuinely excited about Windows 8.  So far, all departments within Microsoft have been banned from discussing Windows 8 at all, with the only outlet being through the Building Windows 8 blog.  On February 29th that embargo looks set to be lifted and we will no doubt then see a torrent of information released, day on day, week on week, that will give the public plenty to read and give the rest of us plenty to write about.

Now though it's all very quiet.  In a way this is lovely as I've been able to enjoy some down time and sort some last minute things out, like my office.  In a way though it's quite eerie.  I remember this happening the week before the Windows 7 beta was released, and believe me, all hell's gonna break loose soon.

Previous Post: « Why Enterprise-Level Metro Apps Can and Will Work
Next Post: How Would You Better Integrate Microsoft's Products? »