Why Enterprise-Level Metro Apps Can and Will Work

I've written a lot about Windows 8 over the last few days as we approach the release of the Consumer Preview at the end of this month.Â  One subject that's not been touched on so far is how effective new Metro apps can or could be in businesses and enterprises, and if a move to Metro might actually be a good idea for many companies.Â  I thought it was time to take a look at this subject in a bit more detail.

The first time I saw a Metro business app demonstrated was on a Windows 7 tablet way back in May 2011.Â  We didn't know anything about Windows 8 at this point and this demo app, written and presented by Microsoft at their Tech.Days event was something new, we had no idea that it was a demo of something much bigger and in fairness the prople presenting it didn't know either.

This app was relatively simple, a tracking app for real-estate agents out on the move.Â  It showed how the computer's GPS could help locate their next appointment and it had work, task and contract management tools built right into the finger-friendly interface.Â Â I pretty-muchÂ dismissed it at the time, as this was a Windows 7 tablet it was being demonstrated on and how could these compete, but I never forgot it.Â  What we didn't know was around the corner was the deal with ARM and the promise of a new tablet-friendly OS.Â  But what about the rest of business?Â  Could Metro apps really be the way forward and how might they work?

One of the biggest pluses for businesses to move to Metro apps is that all too many companies are still using older bespoke software that runs only in either Windows XP or the much hated Internet Explorer 6.Â  These apps will simply have to be re-written and up until now companies have resisted.Â  With all support for XP ending in April 2014, which is less than 800 days from now, a critical deadline is approaching.Â  My argument is why redevelop these apps for Windows 7 when developing for Metro will be a better idea.Â  Let me explain why.

Microsoft have really pushed the boat out with the Software Development Kit (SDK) for Metro, developing it in such a way that it's easier than ever before to write apps for the new platform.Â  On top of this any app compiled using the new tools will automatically run on any and all Windows 8 devices, regardless of the processor they run on.Â  This is an incredible achievement and is the most significant part, for me anyway, of Windows 8 overall.Â  This will make redevelopment of bespoke apps, and the development of new apps, much easier and cheaper. 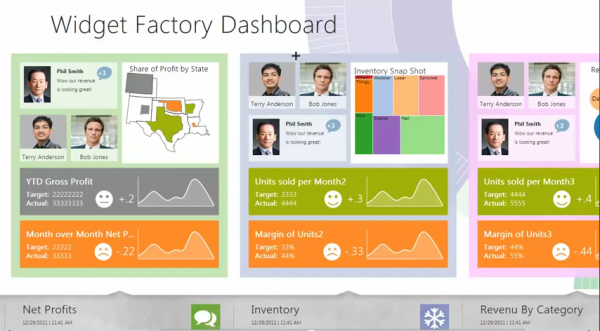 There is also the look and feel of Metro apps to be considered.Â  Just because Microsoft have shown off Metro apps with minimal pull down and push up touch menus doesn't mean that this is the way they have to be written.Â  A screen width of 1080 pixels is still the same resolution regardless of whether its running Metro or the Windows desktop and just as much text and information can be fitted on it.

Moreover some of the examples of Metro business apps that have appeared so far are very reminiscent of the Flash and Shockwave apps that people were designing five to seven years ago.Â  Back then they never took off because the plug-ins didn't provide all the power and resources that were necessary, and could be quite hungry for processor-cycles and memory themselves.Â  Now though, all these resources are baked into the operating system.

The opportunity exists then for creating rich, imaginative and friendly interfaces that are, and this is the important part, designed to work with a mouse and keyboard.Â  Let's not forget that what we've seen so far with Metro is not the only way to design a Metro app!Â  Software development for Windows over the years has shown us that the only limit to innovation on the desktop is the limit of the Human imagination.

Imagine then you have a book-keeping app where you can take advantage of sliding pages, even creating a ledger style and feel if you like, or a data-entry app that, rather than having people squint at small boxes and bemoan having to stare at the world's nastiest interface all day, every day, has a user-friendly tabbed or animated interface that does the same job.Â  Things don't need to be scaled up 10-times, you can design for a mouse and keyboard and everything still can be bespoke!

On top of this you then have the same apps available for people working on laptops and tablets with various hardware configurations and, with almost no problems at all, you end up with apps that can be ported to your company's Windows Phone smartphones.

I want to finish though by answering the question about requiring to have multiple windows open on a screen at one time, each one usually a different running app.Â  Sharing between apps and even cloud services is baked into Windows 8 for the very first time.Â  Metro apps here can save you time by being designed to automatically share your data between these apps, sparing your workload.Â  A cleverly designed app suite in Metro could use tabs or panels to easily switch between, or display, multiple apps on your screen side by side, making everything accessible.

There is nothing to stop any of this from happening and much of it is happening already.Â  In short I believe that the arguments against using Metro in the business space have been clouded by the over-simplistic apps we've seen so far.Â  Nobody has yet seen the true potential of a Metro app when designed properly, these are still to come.Â  I believe that when they begin to appear, the world will suddenly stop and want to take another look.

Previous Post: « Mozilla To Release Firefox Version For Windows 8 Metro UI
Next Post: « The Last Week Without Windows 8, What is the Tech World Doing?