Is It Legal To Use Music2PC?

Music2PC is a free music downloader for the Windows operating system. All that users need to do is type in an artist, band, song name or album to see results populated instantly in the interface. A single click on the download button is all it takes to download music to the local PC.

The question that many users will have when using the program is if it is legal to use. The developer website claims it is 100% legal as it only provides downloads from free legal music sources on the Internet. These sources, or at least examples, are not provided though, and the program interface reveals no information about the Internet locations the songs are downloaded from. 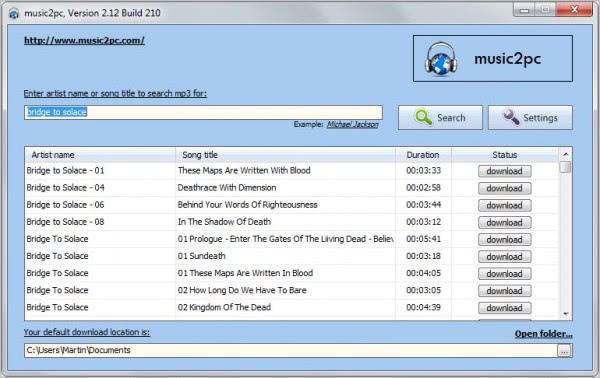 All you get are the artist's name, the song title and the duration of the song. Listing the source could provide users of the program with the reassurance they need to download the music without fearing legal consequences.

A quick check for the top 5 US single charts of this week listed dozens of hits for each song, indicating that the database lists commercial songs and free songs.

A network software reveals that the program taps right into Vkontakte, a popular Russian social networking site. These songs are uploaded by users of the service and not the site operators.

I personally would advise users not to download music through the program. While it is unlikely that doing so will have legal consequences, it is still possible that it will depending on the local jurisdiction.