Musings on the Windows 8 Developer Preview

As a Microsoft Windows MVP and a Windows author I've got a busy year ahead of me.  I've got several Windows 8 books to write for starters, all to be out during 2012 so I really do need to know Windows 8 backwards.  The Building Windows 8 blog has been extremely useful in this respect with the level of detail that the development teams at microsoft have gone into but then there's the first hands-on version, the Windows 8 Developer Preview.

This was released, as you'll remember, back in mid-September at Microsoft's BUILD developer conference.  The aim was to get people excited about writing apps for the new operating system's 'Metro' interface.  With the Developer Preview having been made publicly available at the time it was downloaded in huge numbers and it's been interesting reading blogs from tech journalists who have been using it in anger. 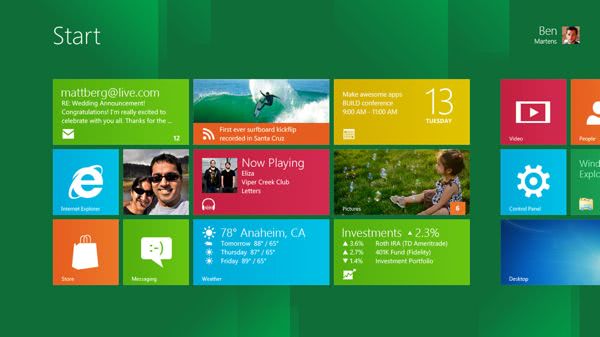 If I need to get right under the hood of Windows 8 then, why haven't I been using the Developer Preview?  There are several answers to this, the first is that the preview is, and many people have commented on this, pretty unusable for day to day work.  At the moment and especially without a working Windows app store there's not much you can do in Metro and, as such, you need to spend all your time on the desktop.  This causes problems too because many of the features that will make working on the desktop pleasurable weren't finished in time for the preview.

Then there's all the things under the hood of the operating system.  We've been reading a steady stream of articles from Microsoft since September on new and sometimes even cool features coming for the beta.  None of these exist within the Developer Preview and to assume that for features such as Hyper-V which can be unlocked in the preview already have their final interfaces is perhaps a little foolish.  There really isn't that much in the Developer Preview and it's quite devoid of anything new or changed outside of Metro.

I'm looking forward to downloading, installing and using the full Windows 8 beta in anger.  I have already decided that I will blow away the copy of Windows 7 on my work touch-enabled laptop and use exclusively Windows 8 on the device.  As for my desktop I'll see how things go.  With the beta however we can assume that Windows 8 will be feature-locked when the beta is released next month, and so this will be the time to start exploring the features and taking screenshots (though these might change slightly).

You might be of the same mind as myself regards the preview, in that you too might have tried it briefly, got bored of it and gone back to Windows 7 until something more stable and complete comes along.  For all the bloggers, writers and authors who say they've been using the Developer Preview in anger, I do wonder how productive they've been and how much they've actually been using it.

Suffice to say, the beta will be a very different beast and very complete.  I've been reserving judgement over Windows 8 until I see it, in the same way I have during the alpha and beta programmes for previous versions of Windows.  It might be genuinely exciting, it will certainly be extremely interesting but one thing is for sure...  It will for the very first time be properly usable.