When it comes to making backups of data stored on your computer, you have got a lot to consider. Two of the most important aspects are the frequency of backups, and the location where they are stored. Storing backups in the cloud has advantages (if your house burns down or someone steals your PC, and you still got access to the backup), and disadvantages (the data is usually not hosted on a server that you have control over, and it may be quite expensive depending on the volume, both storage and bandwidth wise). Local backups basically reverse the disadvantages and advantages of cloud based backups. They are usually a lot cheaper to create and store, but are often stored in the same room as the PC.

This includes a remote control feature for remote backup and recovery sessions, and creating and recovering system snapshots. 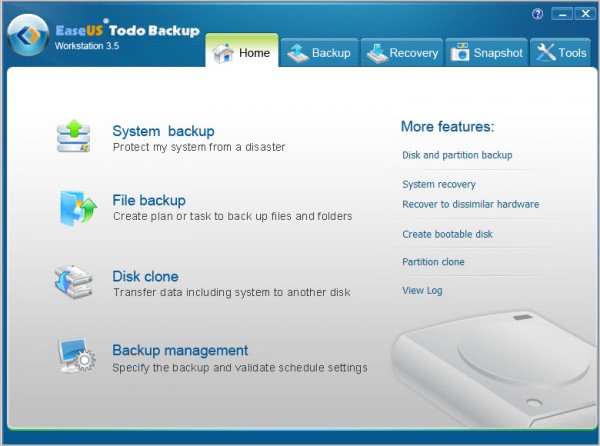 The backup and recovery tabs display all related options. The option to create a disk and partition backup is displayed under backup next file backup and system backup. EaseUS recommends the create snapshots before software installations or as a recovery option when the system fails to boot.

Tools finally lists related applications that can be used to check the integrity of a previously created backup, mount backups to access files diretly, convert images to virtual disks or to create a bootable rescue disc to launch the backup software if the operating system is no longer loading properly.

The snapshot feature needs to be enabled before it can be used. It creates virtual space on the main drive for snapshots 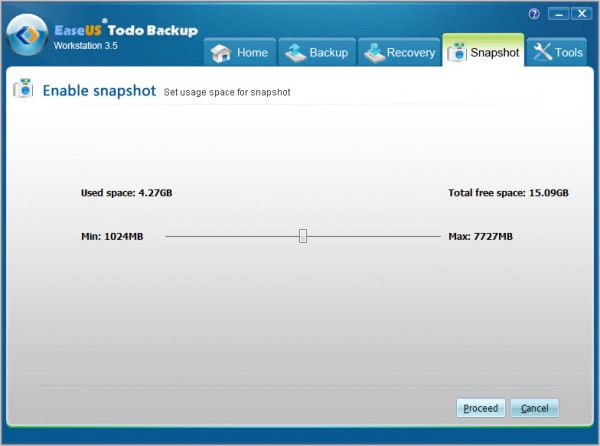 The recovery tab lists options to recover previously created backups. Here it is furthermore possible to recover the system to different hardware, which can be useful if you want to move the operation system to a new PC.

The Snapshot tab offers to create and restore system snapshots. This works similar to Window's system restore feature. Snapshots need less storage space than full system backups. Due to their size, it is usually a lot faster to restore a snapshot than it would be to restore a full backup.

The first snapshot is automatically activated on first boot after the feature has been enabled in the software. It is from that moment on possible to create snapshots from the menu.

Previously created snapshots can be deleted at any time to make up room for instance.

The second feature that is not available in the free version of EaseUS Todo Backup is the remote control feature. It helps you manage multiple PCs from a single machine.

The remote control feature needs to be installed on the main system. Remote PCs also need to be running the program. You need to enter the computer's IP address and log in with an existing user account to make use of the functionality. Please note that the user needs to have administrative privileges.

All program functionality becomes available once a remote session has been established. It is in particular possible to backup or recover files, disks and partitions, and the system.

EaseUS Todo Backup Workstation is a powerful backup solution for the Windows operating system. Backups can be created with a few clicks. Advanced users find settings and options to customize backups to their liking.

The offsite copy option could however use more options than just backing up to ftp. Integration of cloud space providers, or even secure ftp connections would be welcome.

You find more information about EaseUS Todo Backup Workstation on the program page.