Microsoft have begun issuing invitations to testers who expressed an interest in the next generation version of their Security Essentials, free anti-virus product.

In the invitation email the company say...

The Beta program is a fully functional antimalware app with ongoing updates to help protect your PC from viruses, spyware, and other malicious software.Â  In addition to ongoing virus and spyware definition updates, weâ€™ll provideÂ software updates to the Beta for download through Microsoft Update on a periodic basis.Â To have these updates installed automatically, you must be subscribed to Microsoft Update with preferences set to Automatically download and install new updates.

This edition, version 4.0.1111.0 comes in both 64 bit and 32 bit versions and can upgrade a current Security Essentials installation automatically.Â  The company also sayÂ that...

At the end of the Beta program, participants who are subscribed to automatic updates through Microsoft Update will be upgraded to the released version of Microsoft Security Essentials.

Which is news that will be welcomed by many people who simply don't want to have to worry about it. 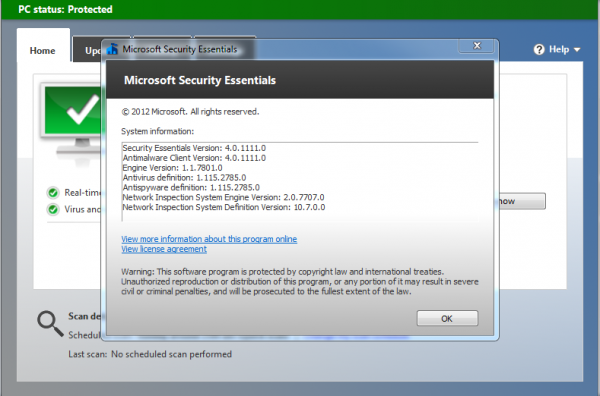 Microsoft have said that among improvements will be a much simplified interface, though on initial inspection it is very difficult to tell the difference between this and the previous version.

The new features are...

This software, which is based on the company's Forefront anti-virus engine for enterprise customers, has been receiving some criticism in the last year for dropping down the ranking in anti-virus tests.Â  This beta includes an improved scanning engine and Microsoft will be counting on this to put Security Essentials back in the top two or three for quarterly effectiveness surveys.

Microsoft Security Essentials is being built into Windows for the first time with Windows 8 and as such is bound to become a significant target itself.Â  If people aren't to install other third-party anti-virus software in Windows 8 they need to be reassured that Security Essentials, currently badged as Windows Defender in Windows 8, is a quality product that will protect them.

This inclusion into Windows 8 will make Security Essentials a target for malware writers who will try and undermine its effectiveness.Â  The overall security features in Windows such as User Account Control will help minimise the surface for attack, but this must be high on Microsoft's mind at the moment.

The public beta is available through the Microsoft Connect website at connect.microsoft.com and I should stress it is just a beta, so should not be considered bug free and it might include vulnerabilities that leave your system vulnerable to malware and viruses.