The Steam forums were for a time not accessible a few days ago. What felt like a hardware or software issue at that time was actually more serious than this.

Valve at this point in time has no evidence that the intruders were able to crack or access credit card numbers or user passwords. 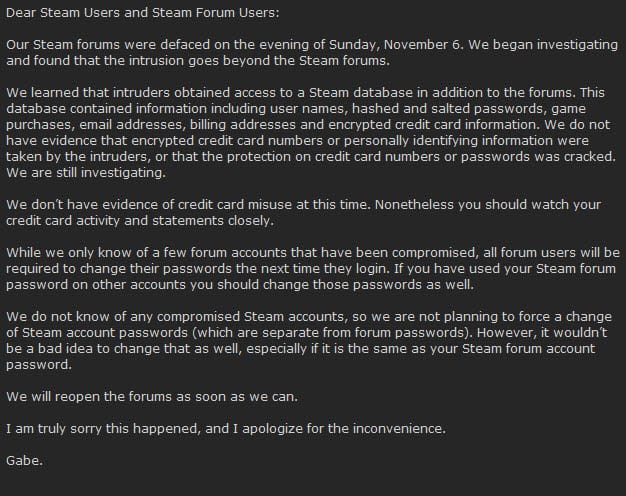 The forums have been taken offline for the time being until the investigation ends. Forum users will be asked to change their password the next time they log into the forums once they are accessible again.

Users who have a Steam forum account should do the following:

It is unlikely that attackers will be able to decrypt the credit card information or passwords. What they may do however is to run a dictionary of the top 1000 passwords against all user accounts to get full access to those accounts.

Users who have used weak passwords for their Steam forum account need to change the password as soon as the forums come back up.

They also need to make 100% sure that the password is not used for any other services, e.g. their email address or social networking sites. It is recommended to change the password on those sites and services right away to avoid further damage.

Martin Brinkmann is a journalist from Germany who founded Ghacks Technology News Back in 2005. He is passionate about all things tech and knows the Internet and computers like the back of his hand. You can follow Martin on Facebook or Twitter
View all posts by Martin Brinkmann →
Previous Post: « Windows XP Has 10-Times The Infection Rate Of Windows 7
Next Post: What are the World's Worst Passwords? »