Sometimes, or maybe even all the time, when you synchronize or download files from your Dropbox online storage you may notice that file transfer rates are lower than they should be. That's not an issue if you do not need access to the files that are downloaded fast as you can just keep Dropbox running as a background process until the data is transferred.

If it is an important file you may want to tweak your Dropbox settings to see if it changes the download speed to the better. Dropbox is by default set to unlimited download rates. If you are experiencing download rates in the 5KB/sec to 20KB/s range and have a Internet connection capable of handling a multiple of that, then you may want to try the following configuration change to see if it changes your Dropbox download speed.

Open the Dropbox configuration. You do that with a right-click on the Dropbox icon in the system tray and the selection of Preferences from the context menu.

Switch to the Bandwidth tab there. Dropbox lists the settings for the download and upload rate in the menu. The download rate is by default set to "Don't limit", the upload rate to "Limit automatically". 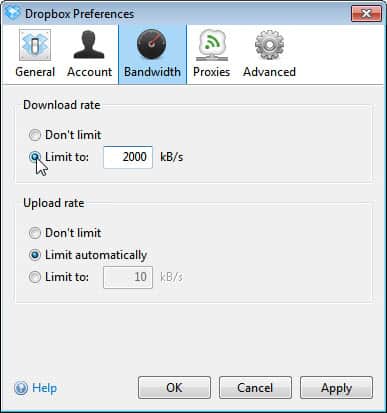 The trick here now, as reported by the Italian blog Computer Acquisti is to configure a custom download rate instead.

The author of the original article suggests to enter a rate that's between 50% to 75% of the Internet connection's bandwidth. Users with a high download rate, say 20 Mbit or more can alternatively add fix values, e.g. 1000 kB/s

Users who report less than optimal upload speeds may do the same for the Dropbox upload rate to speed up uploads to Dropbox this way.

You can also try and switch the proxy settings from Auto-detect to No proxy (if you do not use one) under Proxies.

Please note that Dropbox won't necessarily use all of the bandwidth assigned to the download tasks. Users may see an increase over the initial lower download rate however. You may also want to consider throttling your upload speed rate in the case that it gets maxed out constantly when transferring files to the Dropbox server. This may have an influence on the download rate.

Dropbox recommends doing a speed test to an east coast server in the US to simulate download and upload speed to their servers.

Are you using Dropbox? If so, what is your downloading and uploading experience?

Previous Post: « How to maintain a good security and backup strategy, Part 1 - the Home
Next Post: Copy CMD Output Directly To The Clipboard »