Cycle Input Focus, Activate Forms In Firefox With A Shortcut

The NoScript add-on blocks the automatic focus of the search field on the Google and Bing search page.

That's a issue for me as I use those search engines regularly throughout the day. While I could whitelist the search engines, I prefer not to do so as it whitelists other services that run on those domains.

But there are other sites where you might want to jump to a form on, for instance on your favorite tech blog after reading the article there to leave a comment in the comment form.

The tab key would feel natural as it is used in many desktop applications for that task, but web browsers use it to cycle through page elements.

Firefox users can install an extension like Cycle Input Focus or Fox Input for the task. The former supports the majority of forms on a website, while the latter only supports input fields (that is single line forms). Users who want comment forms supported therefore need to install the Cycle Input Focus extension.

The shortcuts Ctrl-Alt-x and Ctrl-Alt-c are used to activate the next or the previous form field on the web page.

For Fox Input, it is the shortcut Alt-i that puts the cursor into the next form. Users who are not comfortable working with those shortcuts can do the following. Fox Input comes with a single setting to change the keyboard shortcut natively. Cycle Input Focus on the other hand does not. The suggested Keyconfig extension for Firefox is still working despite its age and absence on the Mozilla Firefox add-on repository. 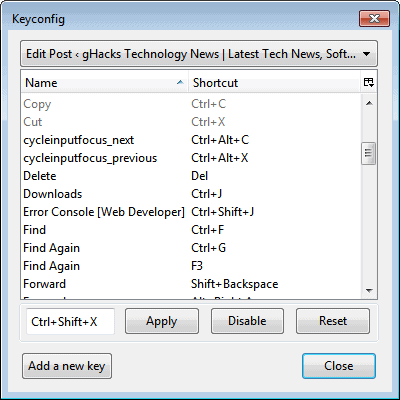 You may need to force compatibility to get the keyboard shortcut configuration utility working in your version of Firefox. Select the shortcut and press a new keyboard combination to set it. The new shortcut becomes immediately available after a click on the Apply button.

Update: A Key Config add-on is available on the official Mozilla Add-ons website. While not identical to Keyconfig, it provides similar functionality.