by Martin Brinkmann on August 25, 2011 in Software, Windows - No comments

Error reporting has been modified by Microsoft with nearly every operating system they have released. Windows 2000 users for instance saw a cryptic error message with no options whatsoever to access the error report. This changed under Windows XP, and was further modified under Windows Vista and Windows 7.

While it is easier to work with crash reports under Windows Vista / 7 thanks to improved handling, it is still lacking fundamental features that one would expect from a first party tool. The ability to look up errors in a "crash" database on the Internet looks good on paper, but falls short thanks to lack of entries in that database.

Nirsoft is not reinventing the wheel with its latest Windows application WinCrashReport. The biggest accomplishment of the portable program is that it unifies the error reporting on all supported versions of the Windows operating system. It is compatible with all 32-bit and 64-bit editions of the Microosft Windows operating system from Windows 2000 to the very latest Windows 7 (at the time of writing).

The program needs to be run when an application crashes on the system. Windows 7 and Vista users may need to run WinCrashReport with elevated privileges if the crashed application was run with administrative rights as well.

The program then displays the file name, exception code and address in its interface, as well as the complete error report in the lower half of it. 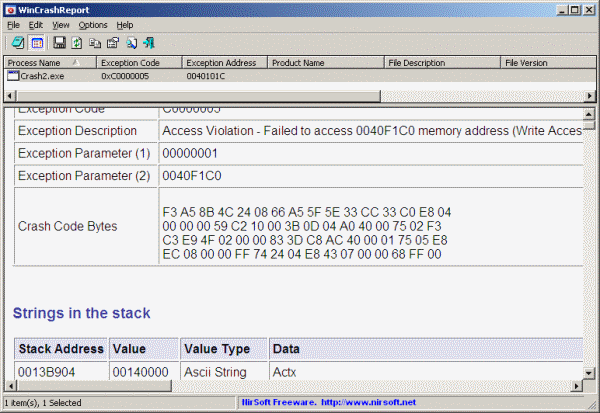 The information presented here are valuable to programmers and admins who need to resolve program crashes. Regular users on the other hand won't necessarily be able to use the available crash information to fix the issue themselves. Regardless, they can use some of the information to research the crash on the Internet.

The program can be used to create a text or html report of the crash. That's handy for keeping records of application crashes for instance, or for sending the report to an admin or coder. The interface displays plain text error reports by default, which can be switched to html reports with the F9 key (and back to text with F8).

Reports are saved with the Ctrl-S shortcut, or the File > Save this crash report menu.

Some users may want to know how this program differs from AppCrashView by the same developer. AppCrashView is only compatible with Vista and Windows 7. It furthermore pulls the information from system crash logs (wer files) that are created by Windows Error Reporting. This means that you may see multiple error listings in AppCrashView that may data back some time ago.

Martin Brinkmann is a journalist from Germany who founded Ghacks Technology News Back in 2005. He is passionate about all things tech and knows the Internet and computers like the back of his hand. You can follow Martin on Facebook or Twitter
View all posts by Martin Brinkmann →
Previous Post: « How to Create a Hotkey or Shortcut to Eject a USB Drive
Next Post: Kill Skype Home Removes The Skype Home Window »